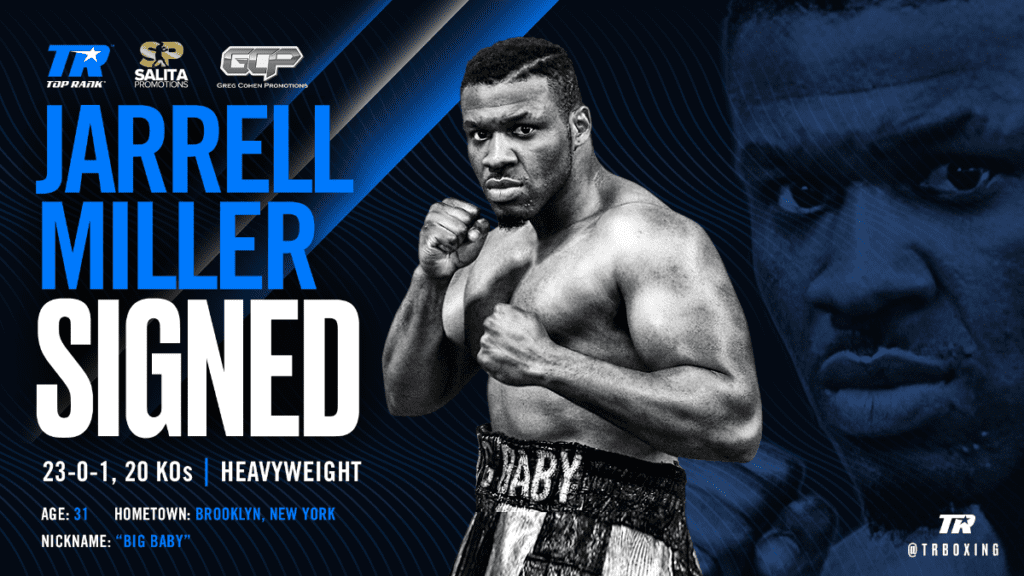 Jarrell “Big Baby” Miller, the big-talking, undefeated, 300-plus-pound heavyweight who hails from Brooklyn, has signed a multi-fight promotional deal with Top Rank. Miller, who is co-promoted by Greg Cohen Promotions and Salita Promotions, will make his Top Rank on ESPN debut in 2020.

“Jarrell Miller is serious about coming back, doing things the right way and becoming heavyweight champion of the world,” said Top Rank chairman Bob Arum. “He is one of boxing’s most unique and exciting characters, but most importantly, he can fight.”

Another addition to the TR Heavyweight stable ?

Undefeated Brooklyn native @BIGBABYMILLER is coming to an ESPN platform near you soon. pic.twitter.com/8S7ZInwCEy

“Minor setback for a major comeback. I’m coming for everything and everyone. No one is safe. Say hello to the bad guy,” Miller said. “Everyone wants to portray the superhero. We don’t live in a sunshine world. I’ll never be the superhero. In my world, the majority of the time, the villain wins.”

“I couldn’t be happier that after months of hard work and perseverance, we were able to make this deal a reality,” said Greg Cohen, CEO of Greg Cohen Promotions. “Top Rank is the perfect partner and ESPN the perfect platform for Jarrell to realize his full potential and become the dominant force in the heavyweight division. Time for Big Baby to get back in the ring!”

“Top Rank was my first promoter when I was fighting, so I know firsthand that Bob Arum and his team will create the right opportunities for Jarrell,” said Dmitriy Salita, President of Salita Promotions. “Top Rank promotes many of the top heavyweights, including Tyson Fury, and Jarrell fits right in with all of the big names in the division. Since I started promoting Jarrell as a six-round fighter, I have been saying that he would be the next heavyweight champion from Brooklyn. Working with Top Rank, I am confident he will have the chance to realize that goal.”

Miller (23-0-1, 20 KOs) is one of boxing’s most polarizing figures, a combination-punching heavyweight who also went 22-2 as a professional kickboxer. Under the Marquess of Queensberry rules, he has won 19 consecutive bouts since a four-round draw in his fifth professional fight. From 2017-2018, he rose the ranks with dominant wins over Gerald Washington, Mariusz Wach, Johann Duhaupas and Tomasz Adamek, all of whom had previously challenged for a heavyweight world title. He last fought in November 2018, knocking out Bogdan Dinu in four rounds.

Miller signed to fight Anthony Joshua at Madison Square Garden for the unified heavyweight title last June, but he failed multiple VADA tests and was denied a license by the New York State Athletic Commission. Now, armed with a new long-term deal, Miller is determined to reclaim his status as one of the world’s best big men.