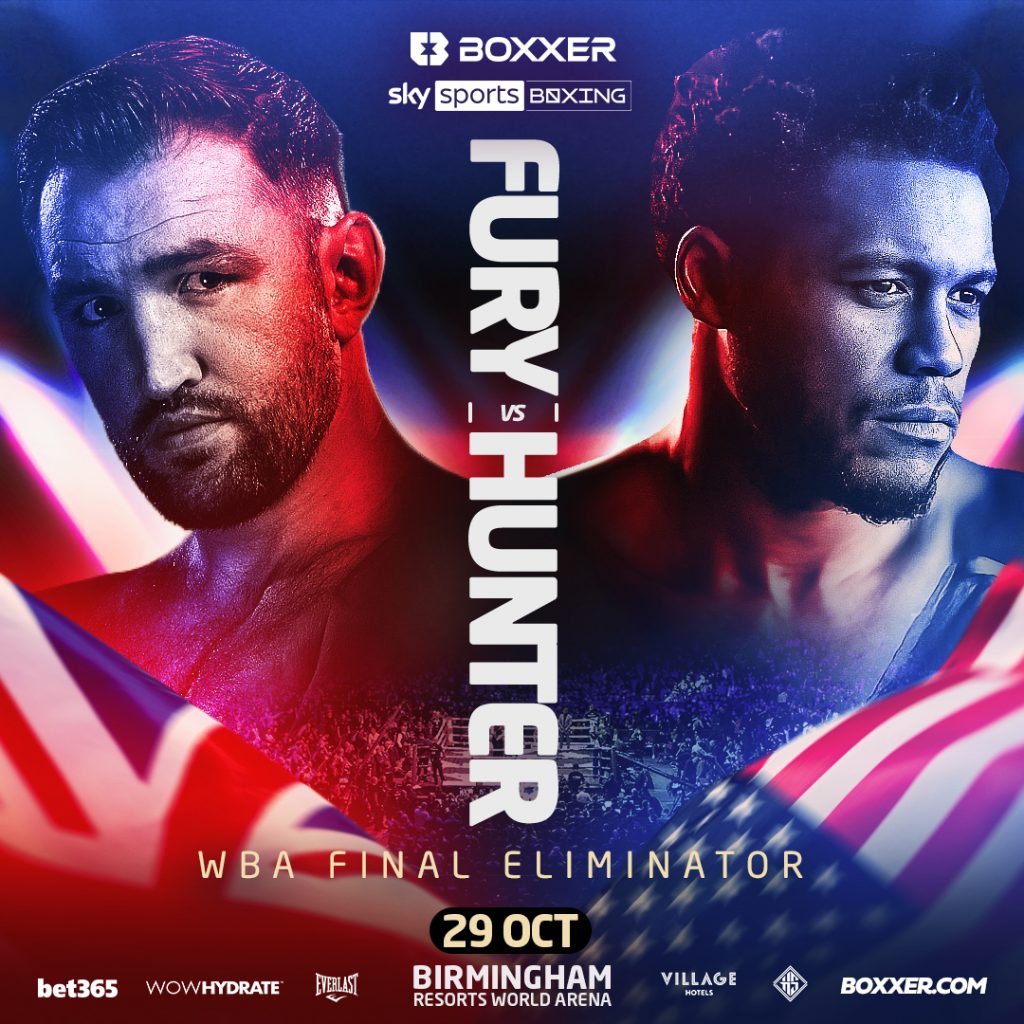 The WBA heavyweight title final eliminator between Hughie Fury and Michael Hunter has been rescheduled for Oct. 29 (Sky Sports in the United Kingdom) at Resorts World Arena in Birmingham, England, Boxxer announced on Tuesday.

The winner of the fight will become the mandatory challenger for “regular” titleholder Daniel Dubois.

Fury-Hunter was initially scheduled for July 2 at AO Arena in Manchester, England, but was postponed in mid-June when Fury became ill and was forced out of the fight. At that time the new date was announced as Nov. 12 but was rescheduled a couple of weeks earlier.

Fury (26-3-0, 15 KO’s), 27, of England, who is a first cousin of heavyweight champion Tyson Fury, has won three fights in a row since a unanimous decision loss to Alexander Povetkin in August 2019. In his most recent fight, Fury stopped Christian Hammer in the fifth round in October.

“I take the fights everyone avoids,” Fury said. “Michael Hunter has fought the best and is up there with the best. These are the fights I want (so I can) show who is the best fighter out there. I’m looking forward to this challenge. I believe I’m one of the best fighters in the world and this is another big fight to prove I stand with the top three in the world heavyweight division.”

Hunter (20-1-2, 14 KOs), 34, of Las Vegas, is coming off a heavily disputed split draw with Jerry Forrest in December in a 10-rounder most thought Forrest clearly won. Hunter’s only official loss was a decision to Oleksandr Usyk challenging for his cruiserweight world title in 2017.

“Hughie Fury has patiently built his way back to world title contention and has overcome big obstacles along the way,” Boxxer promoter Ben Shalom said. “This is another huge test for him against one of the most avoided fighters in the division. Hughie is about to enter his prime. If he can get past Hunter, he puts himself in the mix for world titles in the coming months and years. Michael will also believe this is the chance he is waiting for, and with such a massive opportunity on the line for the winner, both fighters will be giving it their all. It promises to be an epic battle.”

Fury-Hunter was originally paired with an eight-round exhibition bout between British legend Ricky Hatton (45-3, 32 KOs), the former junior welterweight and welterweight titleholder, and Hall of Fame three-division champion Marco Antonio Barrera (67-7, 44 KOs). It was postponed when Fury-Hunter was but so far has not been rescheduled as part of the card on the new Fury-Hunter date.

PBC Confirms Sebastian Fundora October Main Event
Josh Taylor/Demetrius Andrade Both Vacate World Titles
Advertisement
To Top
We use cookies to ensure that we give you the best experience on our website. If you continue to use this site we will assume that you are happy with it.OkNoPrivacy policy