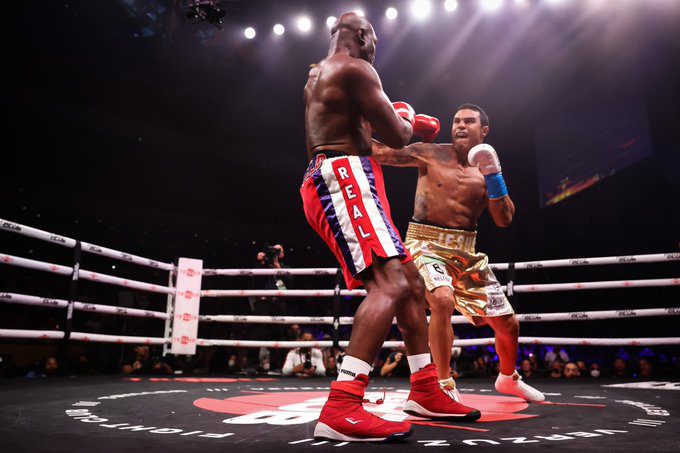 Holyfield Return Saturday- “Symptom Of Myriad Of Other Ills”

Rogers Morton, a prominent figure in American politics in the 1970s, once said, while serving as Campaign Manager for President Gerald Ford’s ailing push for the White House and re-election and while pressed on how he intended to salvage lost momentum; “I’m not going to re-arrange the furniture on the deck of the Titanic.” A quote that would outlive the Statesman, both in political influence and life, he would succumb to cancer in 1979, and one that became synonymous with actions deemed superficial and redundant in the face of impending disaster.

As a 58-year-old Evander Holyfield clambered back down the ring steps in Florida this weekend, a state which withdrew his license to box 17 years ago on the grounds of his diminished ability, it is easy to clamour for boxing to do something, to intervene. Thousands added their voices to the cause in the days before the ‘fight’, screened by Triller (no, me neither) and commentated on by former president and the doyenne of delusion, Donald Trump. They urged ‘boxing’ to change course, to come to its senses.

Gratefully, it took but a few seconds for Holyfield to be separated from his by former MMA fighter Vitor Belfort, if he wasn’t detached from them, or at least reality, when he arrived.

Rather like Morton in 1976, with Ford sliding toward defeat to eventual President Jimmy Carter, any intrusion of common sense, however well intentioned, isn’t going to move the iceberg, undermine Carter’s popularity in the South, or alter boxing’s languorous voyage toward the abyss. Of course, predictions of boxing’s imminent demise is not new, it is a lament with history as long as the story of the doomed ocean liner’s maiden trip in 1912. Holyfield is not a new character in the century old melodrama either.

In 1996, his fight with Mike Tyson, following a 1994 diagnosis of a “non-compliant left ventricle to his heart”, and aged 33, which back then was considered old, rather than a fighter’s prime, was thought at best ill-advised and at worst, a suicide bid. The fact Holyfield emerged with victories in the first encounter and the inevitable rematch and that he carried on boxing for titles for almost another decade confirmed his place alongside the all-time greats of heavyweight history.

Within that period, a pseudonym, Evan Field, widely believed to be used by Holyfield, the father of eleven children and the sponsor of many a disgruntled female, entered the public domain. A customer of the infamous, Florida based ‘Signature Pharmacy’, Evan Field collected various banned substances and shared a birthday with the more famous ‘Real Deal’. When investigators called the number associated with Evan Field’s account. Holyfield answered.

But as with all things in boxing, an individual is never to blame for the sport’s catalogue of problems, nor will punishing or ‘saving’ a single fighter, even one as high profile as Holyfield, cure it of these issues. Holyfield’s story isn’t the real story. Isn’t the problem. A 58 year old boxing has precedent. A fallen champion with cash flow problems returning to the scene of his greatest triumphs is a well worn plot vehicle too. From Jack Johnson, Bob Fitzsimmons a century or more ago to the modern day, old punchers have clambered back between the ropes long after the last glow of life’s Autumn has faded. Hopkins, Foreman and Moore encourage delusion and validate the aspiration but they are a trio of exceptions to the rules of physiology that restrict all other fighters.

An old man fighting isn’t the threat to boxing, it remains sad, dangerous and unhelpful, but it is merely a symptom of the myriad other ills the sport is distorted and debilitated by.

The same performance enhancing drugs to which Holyfield’s name was once linked, even those caught in the net of testing are permitted to fight on, Oscar Valdez the most topical example, as well as boxing’s inability to deliver rivalries, and characters that people care about. The absence of which is why celebrities like Jake Paul now create more interest than the sport’s genuine elite competitors, and the prostitution of the term champion are three significant threats to the sport’s longevity.

All are demons the sport could probably outlast. Boxing outlasted the racial line and the Mob after all, but the challenger it will not see off, will be science. As the starkness of the connection between impacts received in sports, the concussions they cause and the short and long term damage accrued grows ever more defined, the abyss, the iceberg if you will, seems unavoidable. Other contact sports, NFL, Rugby and Football are slowly beginning to adapt to this new reality but they do not share boxing’s central problem; the aim of boxing, it can be argued, is to cause concussion and, worst still, create a construct in which a fighter who has endured a concussion; often characterised by loss of balance and coordination, is permitted to continue.

Knowledge of the cumulative effect of concussions and the implications for long term health is growing too and is already contributing to reduced activity among star attractions in boxing. Where once fighters fought 3-4 times a year, as recently as the 1990s, fights between divisional rivals have become ever more scarce and harder to arrange as activity drops to 1-2 a year.

Preventing battle worn old pugs like Holyfield from fighting again is a noble endeavour and not without merit for both the 58-year-old in question and the conscience of those of us still passionate enough about boxing to bear witness and comment on such aberrations.

But as a way of saving boxing? Rogers Morton probably said it best.