Hearn on Fury- Nobody is talking about his fight

Hearn in an interview with Sky Sports echoed the sentiments that a majority of the boxing community has had about this fight since the announcement was made for it back in August.

Don't panic. Boxing on @SkySports every week from now until Christmas

“Fury has easy fights that nobody is interested in,” said Hearn to Sky Sports. “He supposed to be the best heavyweight in the world? Nobody is talking about his fight.

Anthony Joshua, who is promoted by Hearn, echoed these statements as well.

“I fought Wallin as an amateur. [Wilder and Fury] are the cream of the crop and shouldn’t be fighting those type of people. I can’t fight Wallin, I don’t think I can ever fight lower-tier heavyweights,” Joshua said to Sky Sports.

I was on as a guest with Boxrec’s Grey on the latest episode of The (un)Professional Boxing Podcast about this fight being a showcase fight for Fury. Grey agreed and mentioned how this fight is to keep the “Gypsy King” active until we get that rematch between him and WBC heavyweight champion Deontay Wilder.

Hearn believes that for Fury until he faces Wilder in their huge rematch is losing stock.

“The interest in Fury is diminishing, Hearn stated to Sky Sports. “It is nearly a year since he fought Wilder, and what has happened? Nothing. Fury is a competitor and is up for a fight, but he’s having fights where he cannot get beaten. His profile will dip, and his hunger might as well.”

Fury comes into this fight against little known Wallin as a considerable favorite and is expected to be victorious in easy fashion much like his previous fight against Tom Schwarz in June. Time will tell as to how all of this will play out, but the date for the rematch set for early 2020 can’t come soon enough. 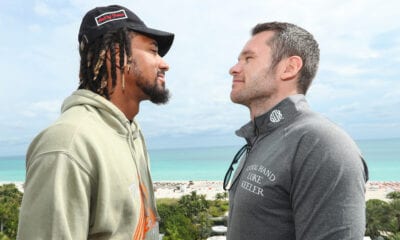