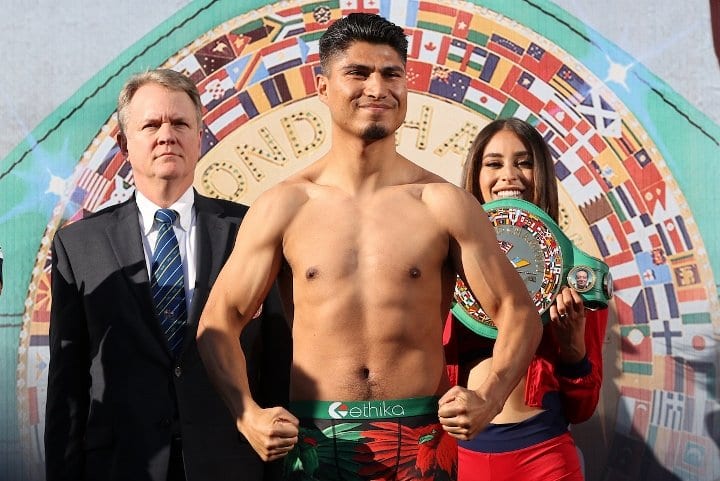 Garcia reflects on loss to Spence

Four-division champion Mikey Garcia is back in action Saturday night as he takes on Jessie Vargas to close out The Star in Frisco, Texas on DAZN here in the US. For Garcia, it is his time go back into the ring since taking his first professional loss to the hands of Errol Spence Jr. last March.

Check out or latest Big Fight Weekend Podcast previewing the fight with guest Ryan O’Hara of Fightnights.com and Ring.tv:

Speaking with Keith Idec from Boxingscene.com, Garcia took the loss in stride and continued to move on.

“Everybody keeps asking the same question – how was the loss?,” Garcia said to Boxingscene. “How was your mind? Nothing. I was fine. I was looking forward to coming back. But at the same time, I was focusing a lot of my time and energy outside of boxing. I got the promotional [company]. I’ve got a show Friday night, actually, here in Irving, Texas. In order for me to grow the company and grow the promotion, I’ve gotta spend some time on it. And that’s what I did.”

“I put some time into other business ventures. … And just spending time with family and kids, and enjoying what boxing’s given me. So, I didn’t take time off because of the loss and dwelling on the fight. I just wanted to focus on something else.”

The big intrigue of this fight is how will Garcia look in this bout after almost a year layoff.

“I don’t see this as being about ring rust, or that time off is an issue. I think everybody’s gonna be very pleased with my performance Saturday night,” Garcia said.

Garcia in this contest is a restart of his ring career at welterweight as he is hoping a victory here will give him a better shot at landing a potential big match up with Manny Paciquao. Time will play out who Manny will choose next in the ring later on this year as that list at this point includes everybody currently at 147. While many feel that Garcia should move back down to 140, he is determined to stick around at welterweight. We’ll see how this all plays out against a game Vargas Saturday night.