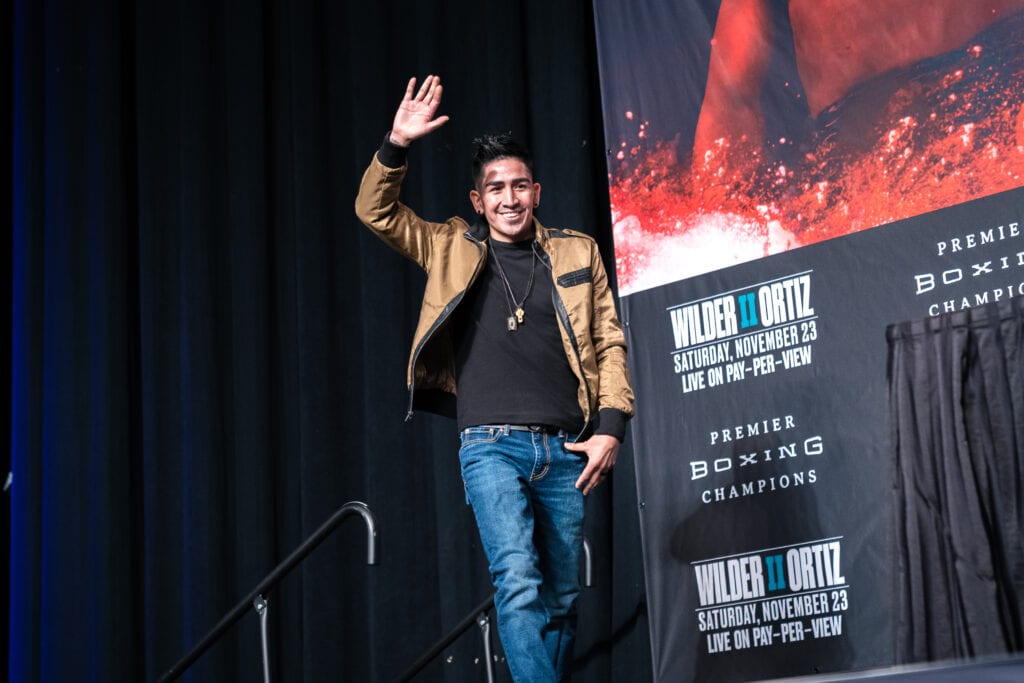 For Santa Cruz, new weight is no problem

The co-main event Saturday night’s Wilder-Ortiz card in Las Vegas will feature a return to the ring for Leo Santa Cruz, as he takes on Miguel Flores for the vacant WBA Super Featherweight title.

While the change in weight class for Santa Cruz is different, he stressed that in the ring the process would still be the same.

“I think I’ll still throw a lot of punches at the new weight,” Santa Cruz said speaking at the final press conference this week. “I always train the same no matter what. My dad says that I need to be working for the whole three minutes of each round.”

“The only thing that is different for this fight is that we’re working on our power. We’re working on sitting down on our punches because we know the fighters in this division are bigger and stronger.

Watch the body!@leosantacruz2 and his father break down tape of @El_Michoacano2 to get ready for Saturday's co-main event. ?

Santa Cruz is taking on Flores in a much delayed match that was supposed to happen earlier this year. Flores was injured and instead Santa Cruz took on a game Rafael Rivera to win a wide decision. Santa Cruz mentioning that power will be a focus will be one think to keep an eye on if this contest goes the distance.

Let’s not forget that this is a chance for Santa Cruz to become a champion in his fourth weight class is also up for grabs.

“To become a four-division world champion would be a huge accomplishment for me,” Santa Cruz stated. “I never dreamed of winning titles in four divisions. Not many fighters can say that and I’m happy and excited to get in the ring Saturday and make this new dream come true.”

While many are expecting fireworks in the main event with Deontay Wilder taking on Luis Ortiz to close out the night, Santa Cruz feels him and Flores have a chance to steal the show.

“To all the fans, I’m really happy and excited to put on another great show for you. Miguel and I are going to give a great show for the fans and try to steal the show. It will be hard with this main event, but we’re going to try our best to make it the fight of the night.

You can hear more about this fight on our most recent Big Fight Weekend podcast:

I believe the action in this one will make a case to do just that on Saturday if Santa Cruz delivers his style of high volume, action fights.