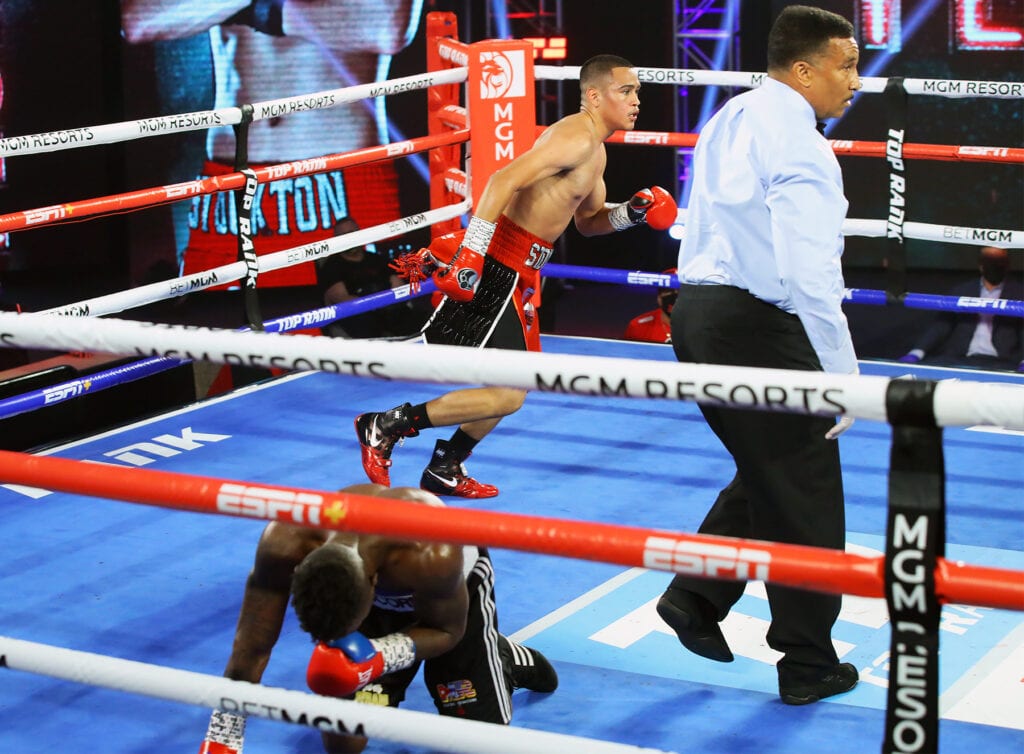 Flores cruises past by Ruiz to remain unbeaten

Gabriel Flores Jr. stepped into the main event on Thursday night and walked out still undefeated as he cruised past Josec Ruiz inside “The Bubble” at the MGM Grand in Las Vegas, Nevada, by unanimous decision.

Flores on the judge’s scorecards had this won handily 100-89 by all three judges.

Flores Jr. from Stockton, California, is coming off a victory by unanimous decision on the undercard of Deontay Wilder-Tyson Fury in February against Matt Conway. Flores went into this contest the huge favorite, and once the bell rang against Ruiz (21-3-3, 14 KOs) played out why to win a little under five grand, you had to put up $187,00.

Flores scored a knockdown in the second round landing a combination, capped with a right hook that sent down Ruiz with a minute to go in the round. Ruiz beat the count of referee Tony Weeks and hung on to finish the round. In this contest, Flores was able to outgun and outbox Ruiz, who seemed to go off to a slow start and wasn’t able to get anything going.

🎯 When that left hand lands 😯@G_Squad_Nation scores a second round knockdown of Josec Ruiz, and looks sharp through three.#FloresRuiz | LIVE NOW on ESPN pic.twitter.com/x6ovFoi3uF

As the fight marched on, Flores seemingly was able to do anything he wanted in the rings landing more shots and was able to keep the veteran Ruiz at bay. This for Flores became more apparent as Flores was utterly in control of the whole fight.

With the win, we’ll see how they progress Flores along. He had planned originally for a bout again in his hometown before the pandemic suspended plans.

“We had a fight planned at Stockton Arena for the 4th of July before all of this COVID-19 stuff started happening so we couldn’t make that happen. That just tells you that we are already planning to go back to Stockton. That is my city, and I love it, and I always stay true to it. The turnout was great, spectacular. I can’t wait for the next one. Who knows when it will be, but everyone is waiting for it,” Flores told BoxingScene.com.

After tonight’s win, let’s see if he gets that bout again back in the 209 at some point later on this year.

Pedraza-LesPierre Bout off following Positive COVID-19 Result
Report- Lomachenko vs Lopez in September with fans?
Advertisement
To Top
We use cookies to ensure that we give you the best experience on our website. If you continue to use this site we will assume that you are happy with it.Ok