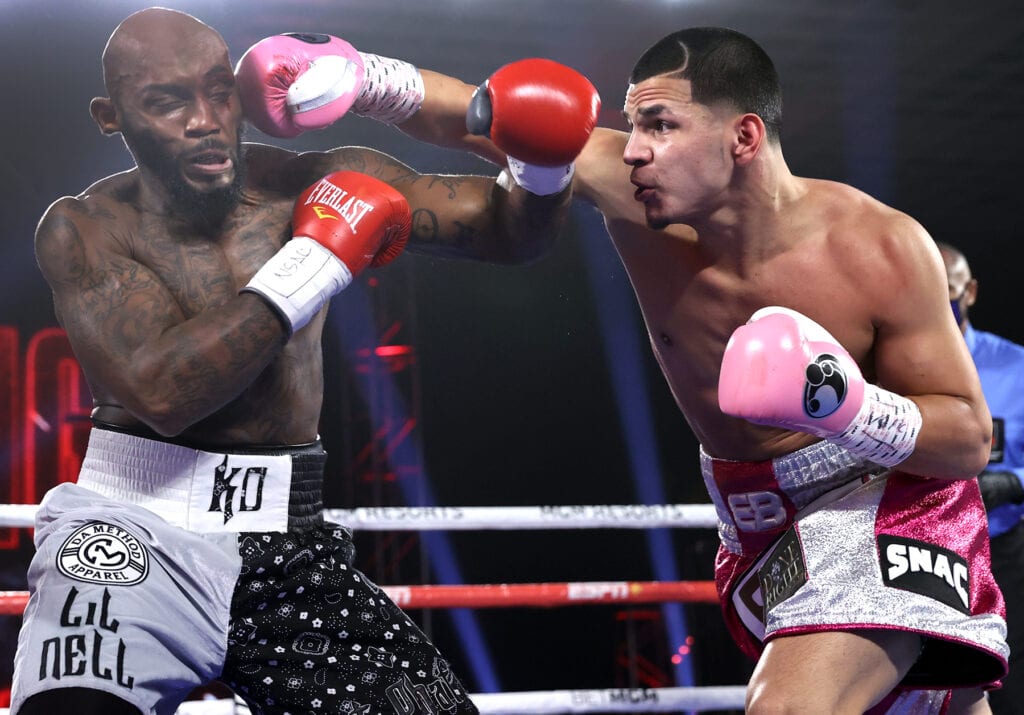 Tonight in the Top Rank Boxing co-feature fight in Kissimmee, FL, all eyes (and ears) will be on Super Middleweight contender Edgar Berlanga in the opening round. This, as the Brooklyn born contender will look to add to his already eye-popping first round KO streak of 16 straight to begin his career.

And while winning is the most important thing, Berlanga trying to keep veteran Demond Nicholson from hearing the bell to end the first round has the most attention.

Does “The Streak” continue or no?@EdgarBerlangaJr & @DemondNicholson are ready to B U M P … 👊

Berglanga and Nicholson stared down (above) after the Friday afternoon weigh-in for their scheduled eight rounder.

When last we saw the Brooklyn-born Berlanga, he was bombing out his latest quick victim, Ulises Sierra, with three knockdowns in the first 2:30 of their December fight in Las Vegas.

The 23 year old Berlanga said that night about looking to future fights,

“I want rounds. The better competition, the better opposition we fight, I believe we’re going to get those rounds in. We ended 2020 with a bang. 2021 is big year for us, and I’m looking forward to it,

“Tito Trinidad was my idol. He still is. Just being with him opened up my eyes as to what boxing is about, the dedication, the focus, leaving the streets and the bad people alone.”

Off his previous :90 destruction of veteran Lanell Bellows in October (photo top), Berlanga is now clearly got boxing fans interested in his first round performances.

Meanwhile, the Veteran Nicholson (23-3-1, 20 KOs) is out of Baltimore and is currently on a five-fight win streak since losing to Jesse Hart back in 2018. And, he made clear to our Marquis Johns in a one on one interview earlier this week, that there won’t be an early end for him,

“Edgar Berlanga has never been in the ring with me. He’s seeing the second, third, maybe even the fourth round with me. Physically, mentally or spiritually, he’s never seen anyone like me in the ring. All of that first-round stuff can go out the door,” Nicholson noted.

HEAR more of Demond Nicholson’s conversation with Marquis on our most recent Big Fight Weekend Podcast on by clicking this sentence.

One more intriguing note for this Saturday night bout to be televised on ESPN is Nicholson’s health and recovery from a serious situation starting two years ago.

As Marquis got more in his conversation, on May 10, 2019, Nicholson was diagnosed with kidney failure. So, he is now an Ambassador for the National Kidney Foundation and will be showing as much with their logo on his trunks when he faces Berlanga.

Nicholson wanted to raise the awareness of kidney failure as it caught him,

“When I went through my situation, I was healthy,” Nicholson explained about his kidney failure. ‘I didn’t have any other conditions. No high blood pressure, no diabetes, nothing. I wanted people to understand that even at 100% healthy, something drastic in your life can happen.”

“85% of the world would never think that they would be in 100% shape and die from kidney failure. I can help information for people in need. So many people in the world have kidney problems and need.”

Having overcome that in the short term, it’s now the hard punching Berlanga that will be the test, an immediate test, when the bell rings later tonight.