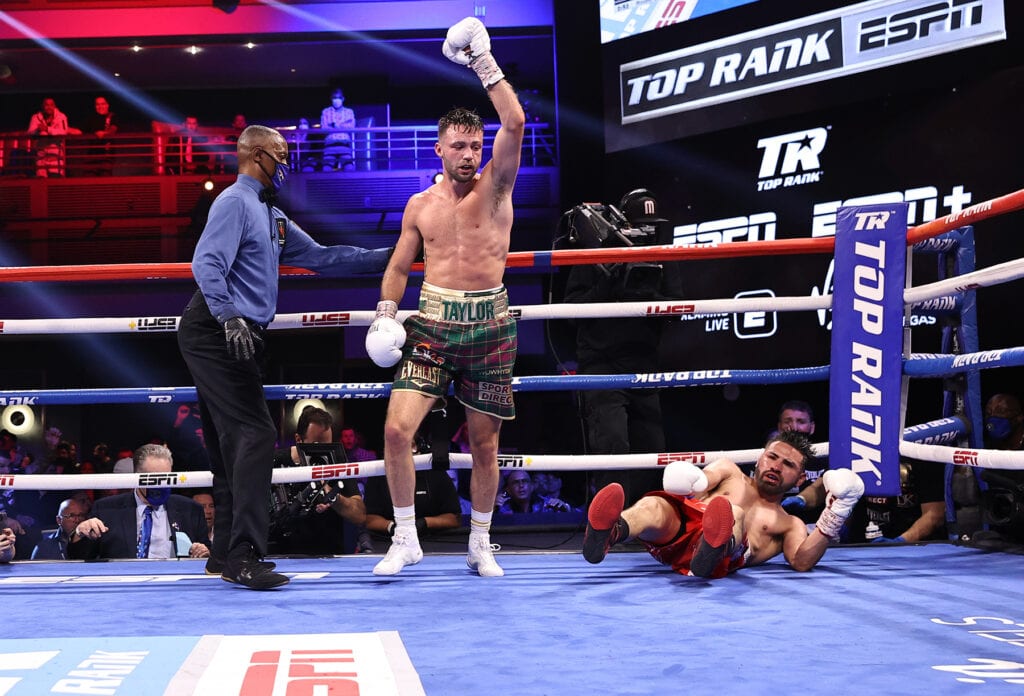 The ever evolving alphabet soup of world boxing organizations is hard to keep up with, and therefore, we don’t try too hard to so. However, one thing needs to be made clear in advance of Saturday night’s Gervonta Davis-Mario Barrios Jr. Welterweight PPV in Altanta: it’s not for the WBA 140 lb. “World Championship.”

No. That belongs to Undisputed champ, Josh Taylor of Scotland, who garnered all the belts with his impressive 12 round decision over Jose Ramirez last month in Las Vegas. More on that, momentarily.

First, it’s fight week for the (legit) two division, unbeaten, world champ, Davis and the interest and the anticipation is clearly building, as he gets ready to fight the unbeaten 26 year old Barrios,

Davis, 24 – 0 with 23 KOs, is one of the top names in the lower weight classes in the sport and his October devastating, one punch KO of former multi-division world champ Leo Santa Cruz was arguably the punch and KO of the year for 2020.

He’s also a draw at the box office, where it’s believed that more than 14,000 will be in attendance at State Farm Arena in Downtown Atlanta Saturday night.

And, the buzz is warranted as he’s taking on a fellow unbeaten, who is taller and heavier than any fighter Davis has previously fought.

Still, Barrios doesn’t hold the WBA’s top title, Taylor does. This, as they have Taylor classified as their “Super Champion” after he beat the former champ, American Regis Prograis in the World Boxing Super Series finale’ in the Fall of 2019.

The WBA now has four different categories of “champions” in their divisions and they designated Barrios the “World champ” after his 6th round KO win over Ryan Karl on the Davis-Santa Cruz undercard. Of course in this era of “Interim” “Super” and “Franchise” etc. designations, it’s latest example of the WBA calling a fighter something that aren’t actually.

Still, not matter what the WBA now says and does with it’s “levels of champions” in it’s divisions (and it’s chaotic/comical), Taylor is “the guy” at 140 lb.

So much so, that he took to social media Monday afternoon to make the distinction clear,

Taylor will likely make the first defense of the Undisputed championship later this year with mandatory challenger Jack Catterall likely in the U.K.

And certainly, taking on the winner of Davis-Barrios Saturday night would be an intriguing next fight, if Taylor wants it. And more importantly, can the differing promotions Top Rank Boxing/MTK Global and Premier Boxing Champions come together? However, that will be easier proposed than done.

For now, it Davis in an important fight with Mario Barrios….just not a bout for the WBA’s “World” title Jr. Welterweight, no matter what they are calling it.