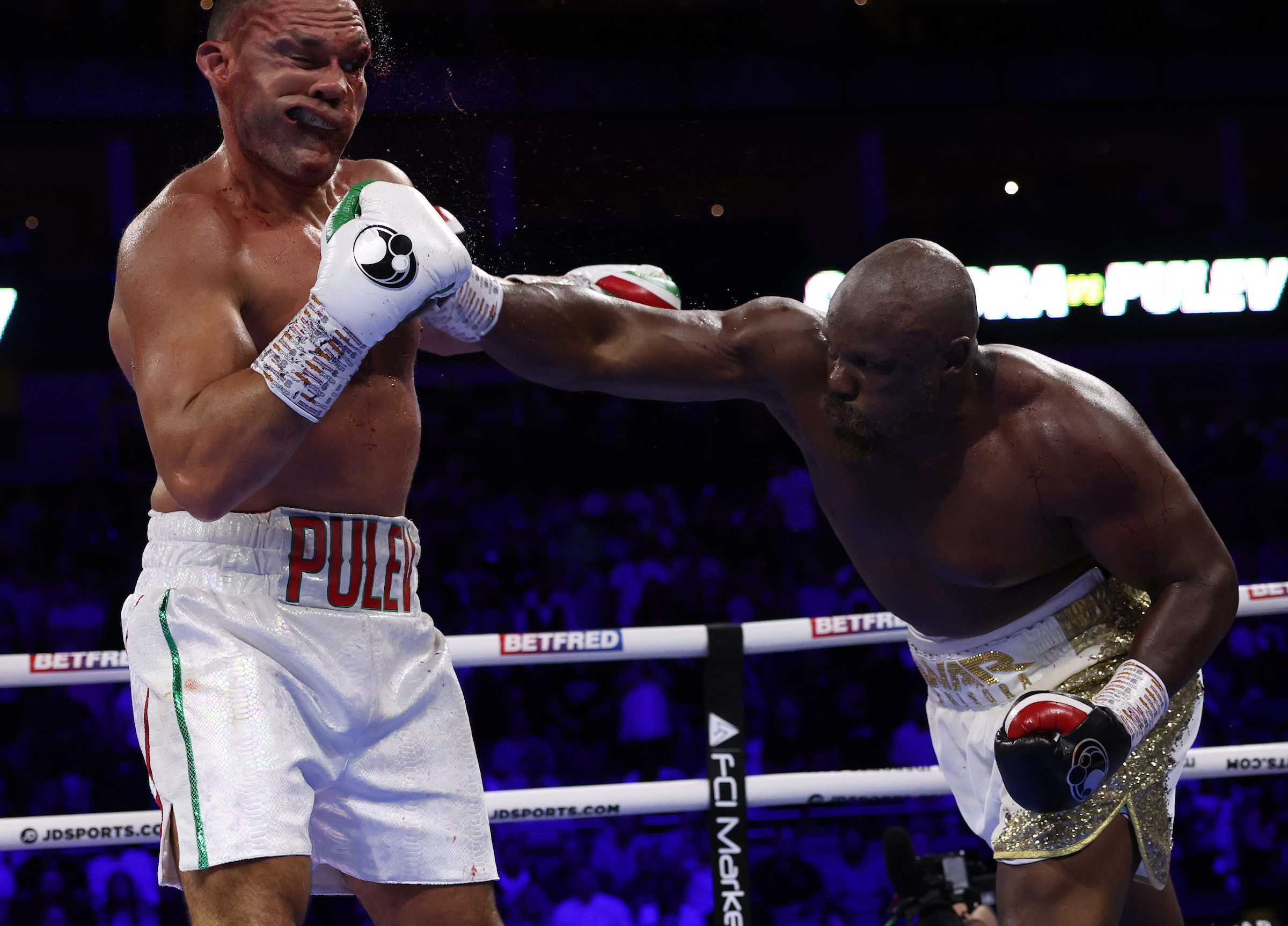 It wasn’t the prettiest bout, but it definitely had some big punches and dramatic moments and in the end English heavyweight Derek Chisora got a long awaited split decision victory in a rematch over fellow aging fighter Kubrat Pulev Saturday night in London.

The bout was the Matchroom Boxing main event from the O2 Arena and it saw a Chisora get a hard-earned decision 116-112 and 116-114 on two of the judges cards with the third one dissenting at 116-112 for Pulev.

Chisora, who had lost his last three fights and hadn’t won a bout since he stopped fellow countryman David Price nearly 3 years ago in October of 2019, was the better fighter for most of the night. He primarily relied on his typical tactic lately in his career of hanging back on the ropes and electing to counterpunch his opponent. This proved effective as the fight wore on Saturday and the 41-year-old Pulev began to tire. Chisora frequently caught Pulev with either a hard overhand right or a left hook off the ropes, while doing just enough to impress two of the judges to go his way.

While there were no knockdowns in the battle, there was a dramatic moment or two.

That included the Bulgarian, who had previously lost in heavyweight title challenges to Anthony Joshua and Vladimir Klitschko, scoring a big right uppercut in the 7th round on Chisora’s chin. That wobbled the British favorite for a second and had him covering up on the ropes. However as a theme throughout the fight, Pulev, now 29-3, simply did not have very much left in the tank or on his punches to be able to finish anything off.

And to the credit of  Chisora, came back with a wicked left hook late in the seventh round just before the bell. Then, Chisora also rocked Pulev with a hard right hand in the 8th round and clearly was scoring the more meaningful punches as the fight went along.

Big fight weekend had the bout 115 – 113 for Chisora and that included him winning a spirited 12th and final round, where he staggered Pulev a couple of times with overhand rights. Pulev also had to battle cuts that appeared to both come from clashes of heads. One was early in the third round over his left eye, but the Bulgarian’s corner did a decent enough job of keeping that one from bleeding through the rest of the fight.

However, another clash of heads opened a large gash over the top a Pulev’s right eyebrow and it bled significantly in the final couple of rounds of the fight.

In the end Chisora improves to 33-12, 23 KOs and said to Matchroom Boxing in the ring he needed this night.

“It was hard. Pulev’s a great fighter. Very hard. Very difficult. I had to train hard for it. I’m happy today, but at the same time, I’m sad. I don’t have many (fights) left in me. But, what I have, I want to give it all to you guys.

My next couple of fights, I’m on my way out. I told Eddie (Hearn) I don’t want no more easy fights.

I needed a win. I’ve lost so many fights on the road…and what a great way to win it.”

Chisora had lost to Joseph Parker by decision in his last two fights and had also lost recently to now, unified heavyweight champ Oleksandr Usyk. But, at least Saturday, he avenged the loss to Pulev, which was also a split decision six years ago.

As for Pulev, of you wonder how much longer he will hang in, specifically when he doesn’t seem to have the legs or punching power any longer at 41 to fight at a high level?

Pulev lost on a TKO nearly 2 years ago in December of 2020 to Joshua for the unified heavyweight belts also in London. He had recently won a fight in Inglewood, CA with American Jerry Forest by decision in May.

As for Chisora’s future, he also suggested potentially fighting former WBC heavyweight champion Deontay Wilder. Wilder remains secretive about whether he will actually ever fight again, as he was last in the ring in his second straight loss to Tyson Fury by a TKO last October in Las Vegas.

But, at least on this night, Chisora fought hard and got his hand raised, and maybe for the final time.