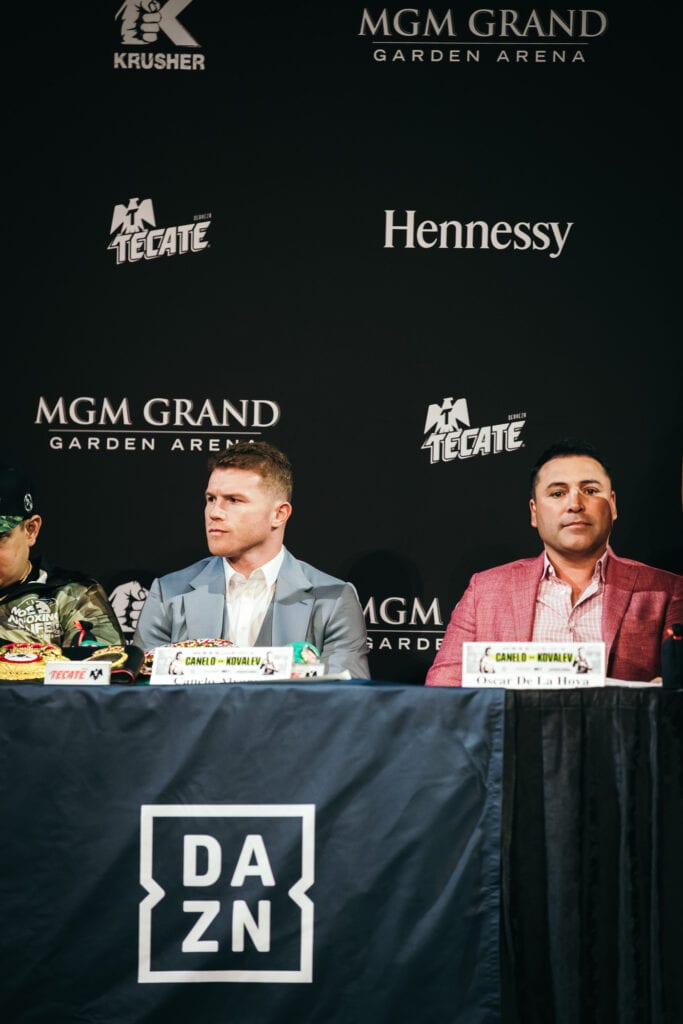 It’s been an interesting soap opera away from the ring for almost a year between former iconic fighter and now CEO of Golden Boy Promotions, Oscar De La Hoya and his premier fighter, four division world champion, Canelo Alvarez. And, De La Hoya is making one thing clear: the relationship is still not “warm and fuzzy.”

De La Hoya spoke with Yahoo Sports boxing writer/insider Kevin Iole on Monday in a video call to cover a wide range of subjects, including when fights might resume for his promotion, etc.

However, the most intriguing part of the conversation was when the subject of Canelo, his next fight and the relationship with De La Hoya came up,

But it’s business, that’s it.

“You learn how to maneuver and you keep your guard up. That’s basically it. Me being a fighter, I know how to protect myself. I take that into my business life that I have now as a promoter and I use it to the best of my ability.”

This is the intriguing part of the drama away from the ring between De La Hoya and Alvarez, as apparently, they are still only speaking through intermediaries. This stems from De La Hoya and Golden Boy failing to secure a fight late last summer for Alvarez against IBF top challenger, Sergey Derevyanchenko.

So, the IBF went ahead and stripped Canelo of their version of his Undisputed Middleweight title angering him, greatly. Gennady Golovkin subsequently defeated Derevyanchenko by decision last October and created more leverage for the potential third fight rematch with Canelo.

Canelo had ripped De La Hoya in an exclusive interview with the Athletic’s Mike Coppinger leading up to fight week,

Canelo Alvarez has been with Eddy and Chepo Reynoso since age 13. Clearly, he’s a loyal guy. He doesn’t see that same trait in Oscar De La Hoya.

We dive deep on Canelo’s relationship with Oscar over after a sit-down with Alvarez at his gym in San Diego: https://t.co/XrayERBWrI pic.twitter.com/qyi4HLwU9z

As we wrote about the final pre-fight presser, Alvarez never smiled, shook Oscar’s hand or would even look at De La Hoya, while De La Hoya was talking during his time at the podium promoting the  Kovalev fight.

Canelo later took to the podium thanking everyone in a roll call, mentioning Golden Boy, but conspicuously not De La Hoya.

Alvarez hasn’t fought in 2020 and hasn’t had much to say about De La Hoya, since late last year.

We do know that Canelo-Golovkin will be the biggest and most lucrative fight for both, but this Alvarez-De La Hoya sub-plot will obviously be part of the whole process of trying to make it happen.

Hearn on Joshua-Pulev without fans “doesn’t sit well with me”
Carden Combat Sports Boxing/MMA card in June
Advertisement
To Top
We use cookies to ensure that we give you the best experience on our website. If you continue to use this site we will assume that you are happy with it.Ok