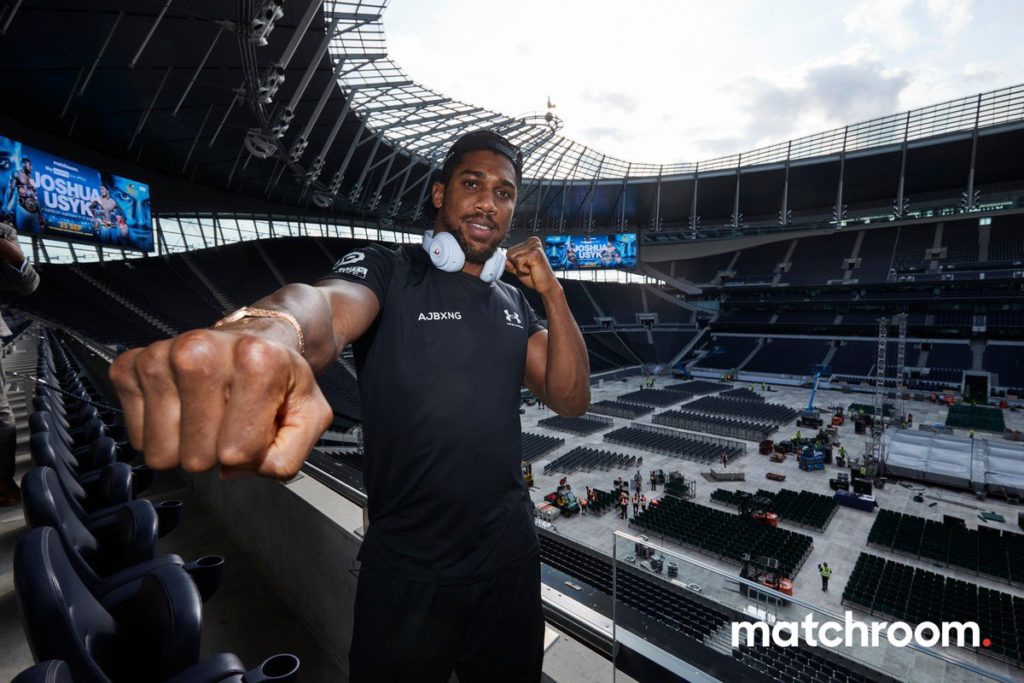 With his rematch trying to regain the unified heavyweight belts he lost to Oleksandr Usyk still pending, Anthony Joshua is making news out of the ring on the future home of his fights.

DAZN made official Monday that Joshua’s bouts, previously part of SKY Sports’ coverage in the U.K. and Europe, will move to their service in the future. Though, they didn’t specify when it would be,

Read all of the details as @anthonyjoshua signs DAZN deal ✍️

From the streaming service’s release,

Expanding on their existing relationship, Joshua has deepened his partnership with DAZN by becoming a shareholder, special advisor, and brand ambassador for the business. As a special advisor, Joshua will join DAZN’s strategic advisory board as the business develops its global boxing offering by providing a richer and more immersive experience for its customers.

“I am entering a new phase in my career with a new training environment, new coaches and now a new broadcaster,” said Anthony Joshua. “Negotiations at this level take time so I am pleased to have it all wrapped up and now I can fully focus on giving the fans and DAZN what they want, knockouts in the glamour division.

“I’ve been working with DAZN and following its progress for a long time. We have enjoyed a really successful partnership in the US for many years and I know the team and understand the passion and drive of the business.

“DAZN’s vision and passion to innovate is what attracted me to the partnership. They are leading the digital landscape in sport and the future of sports broadcasting. I am really looking forward to a long and successful partnership.”

Eddie Hearn added: “We have been successfully working in partnership with DAZN for many years now and this new announcement with Anthony Joshua emphasises why they continue to set the standard for the future of sports broadcasting.

“We have a shared vision with DAZN to make it the unrivalled home of boxing for fans across the world. Now with Anthony joining the team the stage is set to do even more together and we are looking forward to getting started.”

“AJ is a hugely popular and influential sportsman,” said Shay Segev, CEO, DAZN Group. “His alignment with us and his investment in our business speaks volumes. This deal is his seal of approval for our vision and our direction as a business. We welcome his passion, his drive and – most significantly – the vast audiences he attracts.

“In addition to being a world-class fighter, Joshua is an entrepreneur and businessman. He founded management business 258 MGT in 2016 and represents boxing’s greatest rising stars, including Josh Buatsi, Derek Chisora and Ben Whittaker. His partnership with DAZN is a testament to his belief in the business strategy.”

“We are delighted to have concluded this landmark agreement with DAZN. I would like to thank the whole team at DAZN, 258MGT and Matchroom Boxing for helping bring this deal to completion,” said Freddie Cunningham, 258MGT Managing Director.

“We were really impressed with the vision DAZN showed us for the future of Anthony’s career, it was clear from the discussions that we have a shared goal of bringing the fans the biggest fights possible and a partner committed to investing heavily to make them happen.”

Joshua’s bout have been offered on Sky Sports PPV arm over the past few years, and that included Usyk’s upset win over the Englishman back in September. It’s the second time that Joshua has lost his three heavyweight belts, having lost by TKO, but then, having regained them by decisioning American Andy Ruiz in 2019.

Usyk and Joshua’s rematch is still tentatively set for August and likely in Saudi Arabia and it’s believed that it will be the final fight that Sky Sports televises of Joshua’s.

Joshua previously announced prior to the Usyk fight that he had agreed with Hearn’s Matchroom Boxing for a “lifetime contract” for the remainder of his career.

Of course, if he doesn’t defeat Usyk in their rematch, that deal and the DAZN broadcast deal announced Monday won’t really mean much for the future.