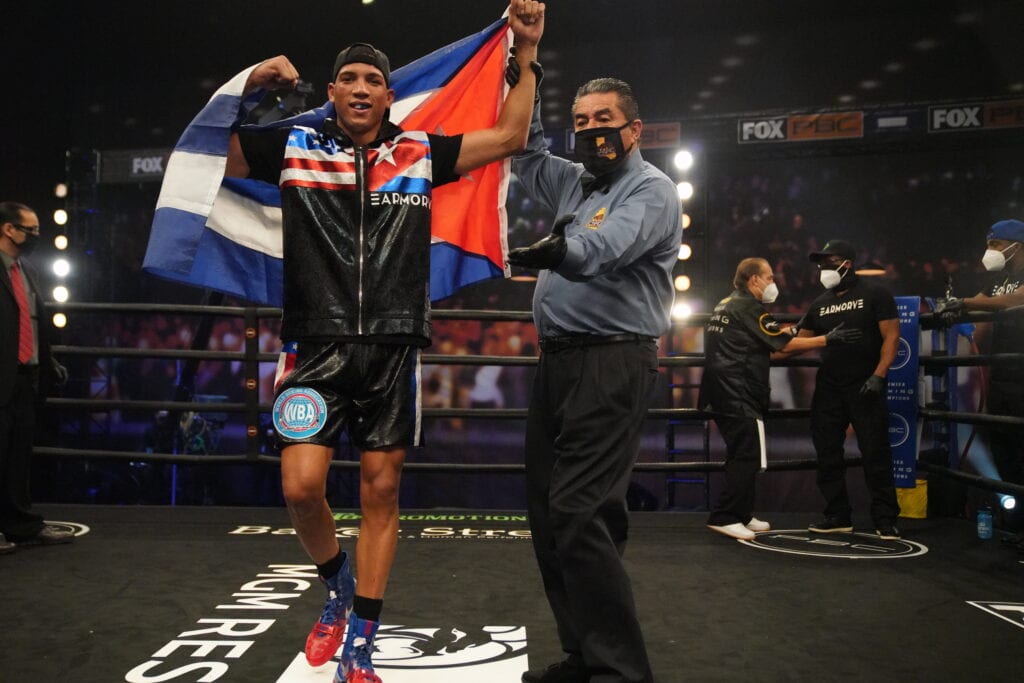 The broadcast begins at 8 p.m. ET/5 p.m. PT and will feature the return of renowned knockout artist James Kirkland dueling hard-hitting Juan Macias Montiel in the 10-round middleweight co-main event while unbeaten young rising star Jesus Ramos battles Naim Nelson in a 10-round super lightweight bout that will kick off the broadcast.

The event will be promoted by TGB Promotions and will take place without fans in attendance at the Shrine Auditorium and Expo Hall, an AEG venue, in downtown Los Angeles.

“Cuban sensation David O. Morrell Jr. burst onto the scene in 2019 and followed that up in August this year by putting on a great performance to capture his interim super middleweight title,” said Tom Brown, President of TGB Promotions. “He will look to continue his rapid rise at 168-pounds with a battle-tested challenger in Mike Gavronski. James Kirkland has entertained fans with his aggressive style and prolific power for years, and seeks another chance to face the best in the sport beginning December 26. Adding in the scintillating rising star Jesus Ramos returning to action against Naim Nelson, and fight fans can expect a late present the day after Christmas on FOX PBC Fight Night.”

Morrell (3-0, 2 KOs) arrived in the U.S. last year and immediately began to show the same prodigious talents that made him a standout in Cuba’s iconic amateur scene. In August he became interim champion by scoring a dominant decision victory over then unbeaten Lennox Allen on FOX. Now fighting out of Minneapolis, Morrell made his pro debut there in August 2019, stopping Yendris Valdez in the first round. The 22-year-old followed that up in November 2019, knocking out Quinton Rankin, who entered the fight with a 15-6-2 record and had most recently gone the distance with former champion Chad Dawson five months before facing Morrell.

“I feel very happy about being able to fight before the year is out,” said Morrell. “I want to reach the goals I set for myself and continue to provide for my family. I’m working toward being the best in my division and I know I will get there. I’m also thankful for my team’s efforts and trust in my talent. I’m ready to take full advantage of this opportunity.”

Originally from Bellevue, Washington, and now fighting out of Lockport, Illinois, Gavronski (26-3-1, 16 KOs) has won back-to-back fights since dropping a 2018 contest to top super middleweight Jesse Hart in 2018. Gavronski owns victories over Brian Vera, then unbeaten Jake Carr and Geraldo Ibarra, in a career that has also seen him face Tureano Johnson. Gavronski’s 2019 victories came in a decision over Emmanuel Sanchez and a stoppage of Tommy Hughes.

“I’m very grateful for an opportunity in a big fight like this,” said Gavronski. “I’ve watched film on David O. Morrell Jr and I have great respect for his abilities. My team and I have put together a great game plan and we believe it’s going to get me victory and the title on December 26 on FOX.”

Born in Austin and fighting out of San Antonio, Texas, Kirkland (34-2, 30 KOs) has made a name for himself as one of the most exciting and explosive fighters in the sport in a long career that’s only seen him defeated twice. The 35-year-old returned to the ring in 2019 with two knockout victories, his first action since losing to Canelo Alvarez in 2015. Kirkland sports an 83% knockout rate and has previously picked up notable wins against former champion Carlos Molina and Alfredo Angulo.

“Pressure is a blessing,” said Kirkland. “I can’t wait to go in there on December 26 to display all my skills and put on a great performance for all the fans watching.”

The 26-year-old Montiel (21-4-2, 21 KOs) steps back into the ring after his U.S. debut saw him fight Hugo Centeno Jr. to a split-draw on FS1 in December 2019. Representing his native Los Mochis, Sinaloa, Mexico, Montiel had previously stopped Marco Reyes and Gustavo Castro to bounce back from a defeat to former champion Jaime Munguia in 2017.

“I know that a win on December 26 will catapult me into even bigger fights,” said Montiel. “I’ve prepared better than ever before leading up to this matchup. I’m more than ready to make the most of this tremendous opportunity.”

The nephew of welterweight contender Abel Ramos, Jesus Ramos (13-0, 12 KOs) has steadily increased his competition as 2020 has seen him deliver knockouts of Ramal Amanov, and most recently then-unbeaten Esteban Garcia in action on FOX in September. The 19-year-old from Casa Grande, Arizona has scored three-straight knockout wins following his only pro fight that has gone the distance, which came in a June 2019 unanimous decision over Kevin Shacks.

“I’m super excited to be back in the ring a day after Christmas,” said Ramos. “I’m looking forward to closing out this year strong. I have a tough opponent in Naim Nelson. He’s been in there with some great fighters, but I’ve been working hard to prepare as best as I can. I’m confident that with the work we’ve been putting in, we’re going to get the result we want and in impressive fashion once again.”

A native of boxing-rich Philadelphia, Nelson (14-4, 1 KO) has challenged WBA Super Lightweight Champion Mario Barrios and former champion Mickey Bey throughout a career that dates back to 2011. The 30-year-old won his first 12 pro fights and most recently earned a unanimous decision over Roy McGill in October 2019.

“I’m thrilled to have this opportunity to fight this year,” said Nelson. “I’ve done my best to stay safe and healthy amidst the pandemic by continuing to train hard. I never took a break away from the gym. I knew that when the call to step on the big stage, I’d be more ready than ever. I’ve been in this position before against a young knockout artist, and I love these kind of challenges. It’s my job to go in there and use all of my experience to show him another level and bring home the win.”