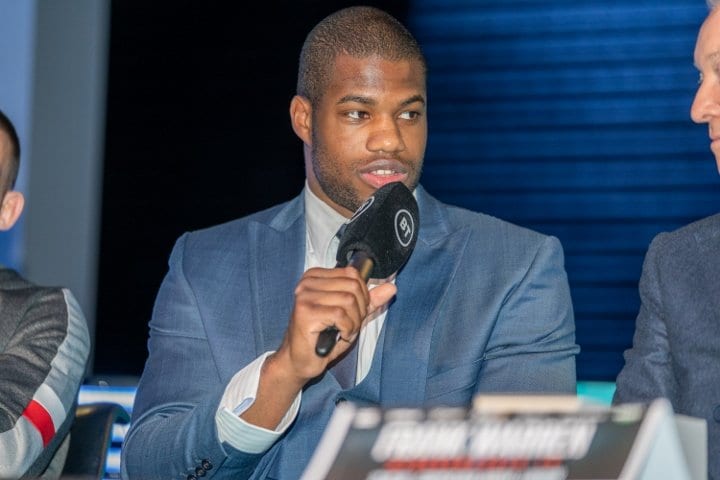 With their Saturday night Heavyweight contender showdown closing in, unbeaten English contenders, Daniel DuBois and Joe Joyce met with the media one final time on Thursday.

And as you would expect, both are confident that they will score the biggest victory of their career,

Two days out from the biggest all-British heavyweight fight in years ??

Daniel Dubois and Joe Joyce face off ahead of Saturday night ? #DuboisJoyce pic.twitter.com/MiY5sI9W57

The younger Dubois is favored and his a spectacular puncher especially with his Cannon – like right hand. The undefeated (15-0, 14 KOs) 23 year old, Dubois knocked down Ricardo Snijders four times in just two rounds of action before referee Marcus McDonnell, mercifully ended their late August bout. That fight served as a tune up for the Joyce, battle.

“Definitely, I want to win in devastating fashion,” Dubois said Thursday. “I want to send out a clear message to the rest of the fighters in the division, around the world really, I’m coming.”

However, the veteran Joyce, who is 35 years old, is expected to push Dubois. This is, especially if he handles his power in the early rounds.

Joyce said later about Dubois being heavily favored by the British bookies, “His odds aren’t that great. So, it looks like he’s just going to wipe the floor with me. So, he has all that pressure on him to deliver on the night. Whereas, I’m the Underdog and I’m coming to take him out.

Joyce is 11-0, and delivered an early knockout of German Michael Wallisch in just three rounds to hold up his end of the bargain for the Dubois showdown back in late July. The former Silver Medalist in the 2016 Rio Summer Olympics and also was a former MMA fighter for several years, previously.

This fight has been twice delayed due to the impact of Covid-19 and a wait and see ,if some fans could be present. Instead, it will be part of a modest pay-per-view offering Saturday night from London.

The hope for the winner is that they could position themselves for a possible bout with either WBC Heavyweight Champ, Tyson Fury or Unified belts holder, Anthony Joshua at some point. However, it’s not likely, because those two will likely fight each other next year first.