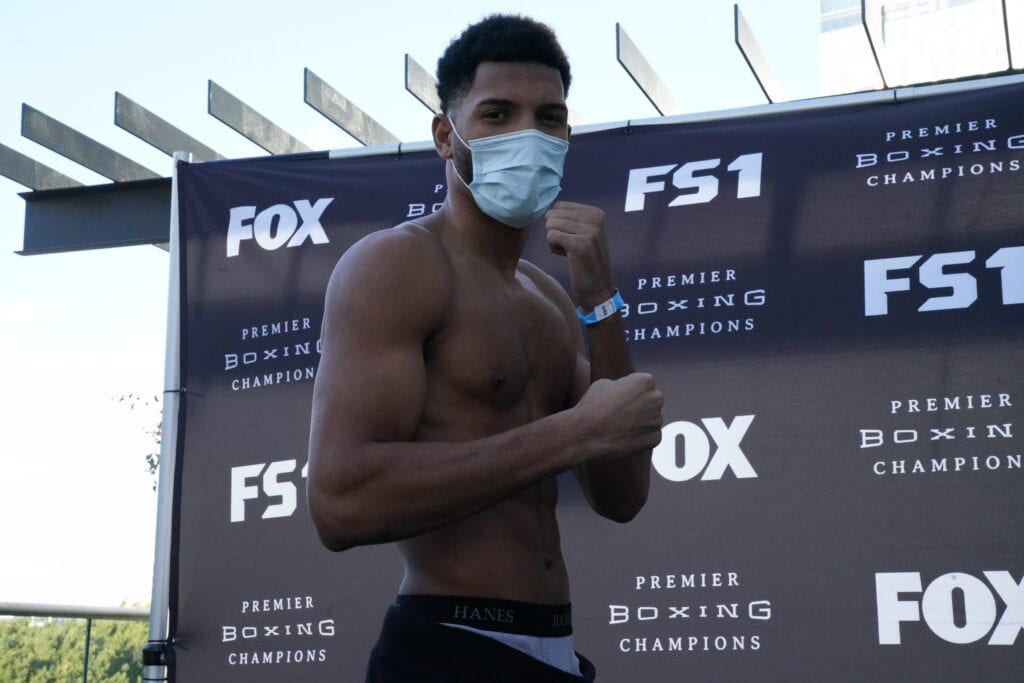 Cuban-born Super Middleweight David Morrell was to have defended his interim WBA title in the main event in Los Angeles Saturday night. But now, his fight has been reduced to a non-title 10-round affair after he missed weight Christmas afternoon.

Morrell, who now lives and trains in Minneapolis is only 3 – 0 as a professional and he was slated to battle Mike Gavronski for 12 rounds in the main event of the Premier Boxing Champions on Fox card Saturday night.

However, at the Friday afternoon weigh-in Morrell was more than 2 lb. over the 168 lb. limit, and the fight was then reduced to a 10-rounder.

Morrel. had a decorated amateur career in Cuba winning 48 of 53 fights and he turned professional in the summer of 2019. He had knocked out his first two opponents in 2019 and then won the WBA interim Super Middleweight title with a 12-round decision over Lenox Allen in August of this year.

We discussed more about the only significant fight card to be going on in the United States this last weekend of 2020 on our most recent Big Fight Weekend podcast. Senior writer Marquis Johns had more thoughts on Morrell and this matchup. And we discussed the entire card, including the prospects to watch in Los Angeles on Saturday night,

It’s not the first time that a prominent fighter has had trouble post Covie 19 pandemic making weight. Former WBC 168 lb. champ, David Benavidez, was stripped of his belt for failing to make the limit for his September title defense. And World Jr. Welterweight champ/now contender Regis Prograis also missed weight before his non-title bout in October.

As for Morrell’s championship status, England’s Callum Smith had been the WBA’s “World Champion” at Super Middleweight. That is up until his 12 round defeat at the hands of Canelo Alvarez last Saturday night in San Antonio Texas..

The twenty-two-year-old Morrell was apparently being groomed for a World title shot in 2021 despite having only a few professional fights. And, that could still happen somewhere down the road. This would be especially if he scored an impressive win over Gavronski, who is 26 – 3 -1 with 16 KOs in his career.

The co-feature fight Saturday night has veteran Texan James Kirkland, 34-2, in a 10 round middleweight battle with Mexican Juan Montiel.

The PBC on Fox show will close out the significant fight cards in the United States for the end of what has been a bizarre 2020 year overall and in “the sweet science.”