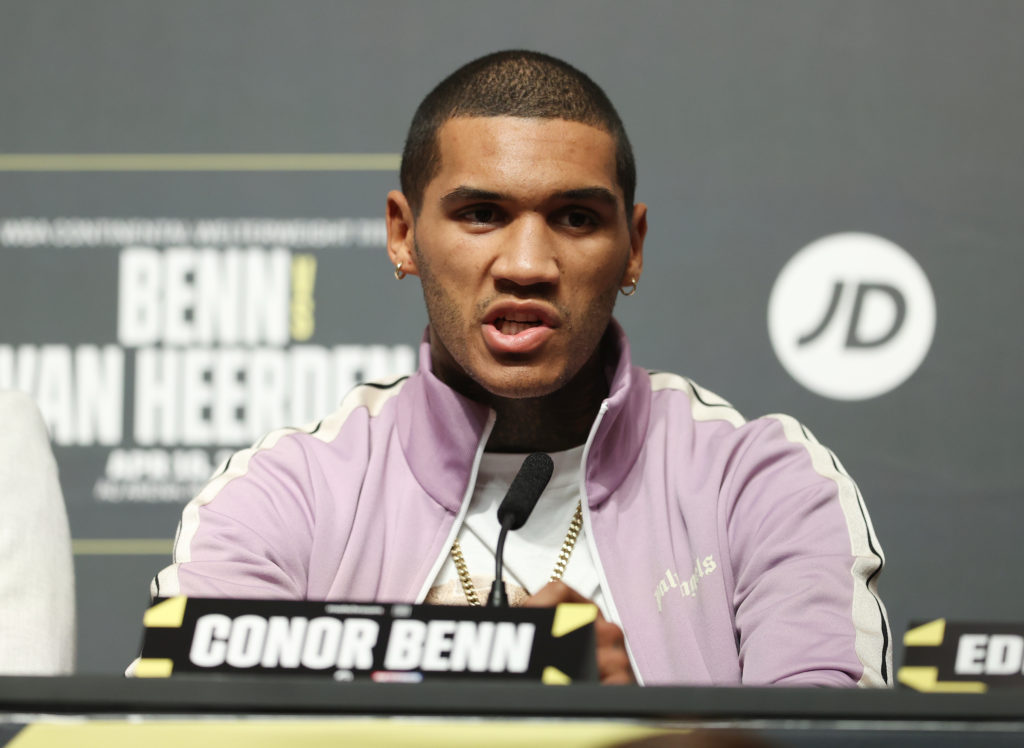 Coming up Saturday night in Manchester, England, unbeaten British Welterweight contender Conor Benn will headline for Matchroom Boxing in the next step for what he hopes will be an upcoming world title shot. And, the son of the boxing legend, who’s seeking to be a champion like his father Nigel, made clear Thursday that he welcomes any and all challenges they will come his way.

Benn, 20-0, 13 KOS, spoke to the media at the final Matchroom presser for his showdown with veteran Chris Van Heerden and elaborated,

🗣️ “I love challenges… I'll pass this with flying colours! If I see an opportunity, I'll take him out!“ – @ConorNigel#BennVanHeerden

He followed that with this warning for Van Heerden having said that Benn cannot box, “last time out (Chris) Algeiri got outboxed and knocked unconscious. I can do both. Ask Sebastian Formella. I’ve had 13 knockouts in 20 fights. What were all the rest then?”

Of course, the 25 year old Benn is pointing to his spectacular KO of the American Algeiri last December, where a booming right hand had the New Yorker unconscious on the way down to the canvas. But, in his previous bout, he decisioned another veteran in Adrian Granados over 10 rounds, proving he can patiently box and win on points, too.

Still, Benn also savaged Sammy Vargas in under two minutes in April of 2021, as well. And, most of his fans want to see something similar Saturday night. But, that’s where the southpaw Van Heerden comes in.

He has won 28 bouts with 2 losses and a “no contest” in his last bout with American star Jaron “Boots” Ennis in December 2020. That fight ended in the first round when an accidental clash of heads opened a nasty gash on the South African native’s brow, stopping the fight immediately.

Van Heerden had won five fights in a row before that after having suffered a TKO loss to then unbeaten contender, now unified 147 lb. champ, Errol Spence in September of 2015. Clearly though, he’s in for a difficult night with a big time puncher.

And, it’s a fighter in Benn, who wants to get a shot at Spence himself or Yordenis Ugas,, who will be fighting on the much bigger PPV stage in Texas later on Saturday night.

First things first, though. He has to handle the soon to be 35 year old on Saturday either quickly or over the long haul.