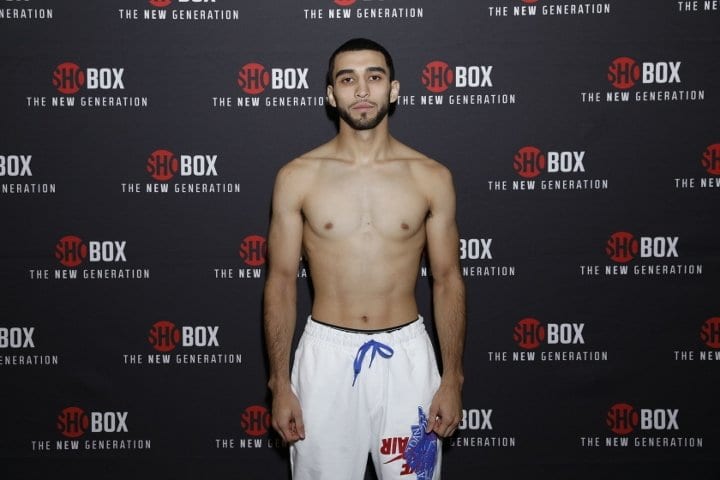 Martinez recently signed a multi-fight pact with Top Rank and will look to shine in his promotional debut. Conceição-Martinez and a co-feature will air live on ESPN & ESPN Deportes (simulcast on ESPN+) at 10 p.m. ET/7 p.m. PT. Undercard bouts will stream live and exclusively on ESPN+.

Promoted by Top Rank, in association with Tony Holden Productions, tickets starting at $49.50 are on sale now and can be purchased at tickets.hardrockcasinotulsa.com and at the Box Office at 918-384-ROCK (7625).

TR is headed back to Tulsa, when Olympic gold medalist @RobsonR60 & recently signed @Xavier_Martin3z meet in the 10-round WBC title eliminator 💪

“This has all the makings of a special, action-packed main event,” said Top Rank chairman Bob Arum. “Conceição nearly defeated the great Oscar Valdez for the title, while Martinez is a young kid hoping to make a name in the 130-pound division.”

Conceição (16-1, 8 KOs), from Bahia, Brazil, captured a gold medal at the 2016 Rio Olympics, capping a 400-plus fight amateur career that included wins over the likes of Cuba’s Lazaro Alvarez and a razor-thin defeat to Vasiliy Lomachenko at the 2011 World Championships. After nearly five years as an unbeaten pro, Conceição challenged WBC world champion Valdez in September. Conceição built an early lead, but Valdez rallied late to shade the unanimous decision.

Conceição said, “Nothing can stop me. Nothing can make me lose focus. I remain firm towards my goal of becoming a world champion. My last fight was just a minor setback. I’m going to make sure that all my hard work and sacrifices will not be in vain.

“I’m excited for the opportunity to be the main event and to face an undefeated fighter like Xavier Martinez. I’m sure we will give the fans a great show.”

Martinez (17-0, 11 KOs) began boxing at the age of 6 in Sacramento and compiled an 85-10 amateur record before turning pro in June 2015. He stepped up in 2019 with knockout wins over Jessie Cris Rosales and John Vincent Moralde and survived a gut check versus former interim world champion Claudio Marrero the following year. Martinez was knocked down twice in the eighth round, but outboxed Marrero in the championship rounds to earn a unanimous decision. He last fought in May and dominated veteran Juan Carlos Burgos over 10 rounds.

Martinez said, “It was a dream to get a multi-year promotional deal with Top Rank and a shot to be the main event on ESPN. This is my chance to show the world I’m one of the best in the 130-pound division and work towards my goal of becoming a world champion under the Top Rank banner.”

“Xavier is positioned to write his destiny, and the stage is set,” said Rick Mirigian, Martinez’s manager. “He can bring back the sport to Sacramento in a big way and fulfill his dream of becoming a world champion. Thank you to Top Rank for getting this done and believing in Xavier.”