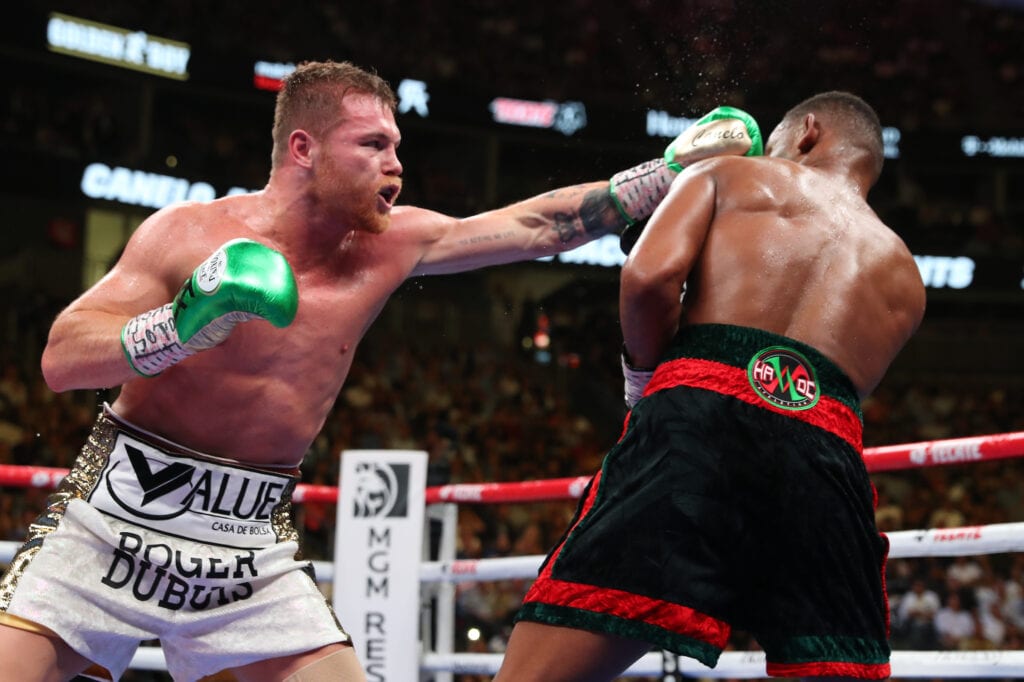 As the world continues to deal with a Covid-19 pandemic, two humongous stars of entertainment and boxing have joined together in a funny Public Service Announcement urging the public to stay safe.

Academy Award-winning actor and arguably one of the most recognizable “hunks” of the “big screen” from the last 20 years, Matthew McConaughey and four division World Champion, Canelo Alvarez, star in the recently-released PSA.

In it, the bi-lingual McConaughey begins by urging everyone in Spanish to wear a protective mask or cloth item around their nose and mouth, when going into public to help curb the spread of the potentially deadly Coronavirus. Alvarez then joins in with his own similar message and the two of them do a great job and getting the point across.

“Please, if you must leave home, be sure to wear a mask, please!,” McConaughey says in Spanish. He then introduces “a champion friend” (Alvarez).

Then, humorously, Canelo adds, “If you must leave wear a mask or bandana. Remember, that we have to protect our families, our friends, and beat this f***ing Coronavirus.”

And the video ends with the two putting on their protective masks.

McConaughey, a huge sports fan, is iconic among movie and entertainment fans of the past three decades, especially for his famous three word line: “Alright, alright, alright!” in the early 80’s movie “Dazed and Confused.” He starred in numerous smash hit movies like “A Time to Kill,” “The Wedding Planner” and “How to lose a Guy in 10 days.”

He, then ascended to the greatest honor in acting in the world by winning the Academy Award for Best Actor in 2014 for his incredible portrayal of the true story of Texas cowboy/businessman Ron Woodroof in the movie “Dallas Buyers Club.” Woodroof was diagnosed with AIDS and later died, while trying to become an advocate for AIDS treatment and getting scarce medical supplies for himself and others in the mid-1980s.

As for Canelo, it’s not actually known whether he has met, or even knows McConaughey, as he’s appearing simultaneously in the video from a separate location. However, the current Unified Middleweight champ continues to train for the resumption of boxing later this year. And, the growing belief is that his next fight will be a third bout the former Undisputed Middleweight champion Gennady Golovkin.

Canelo had been slated to fight unbeaten English super-middleweight World Champ, Billy Joe Saunders, this weekend in Las Vegas. But the fight, like all of the sport, was put on hold by the Covid-19 outbreak. And, subsequently, Saunders has been suspended by the British Boxing Board of Control for his ill-advised comments on a social media video in late March making light of domestic violence.

So, we wait for when and against whom, we will see Canelo back in the ring later in 2020.