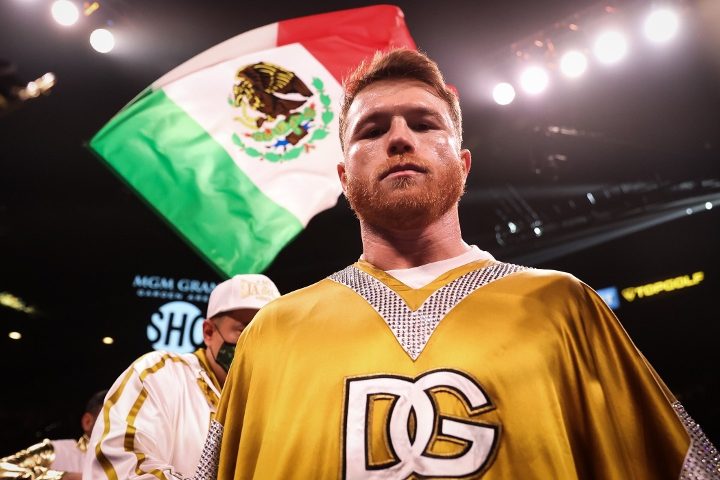 With speculation continuing that Undisputed Super Middleweight champ and future Hall of Famer Canelo Alvarez will be back in the ring in May, one of the top pound for pound fighters on the planet is also showing off skill at another very difficult individual sport- Golf.

Alvarez is taking par in the PGA Tour’s AT&T Pebble Beach Celebrity Pro-Am, where the top golfers in the world come to play with a mix of celebrities, athletes and good amateur golfers also paying serious coin to play rounds with the professionals in their group.

And, on Wednesday afternoon, Canelo showed off his “short game” by competing in a celebrity par 3 contest where he nearly made a dramatic hole in one in front the fans gathered at the Northern California landmark course. Watch and listen to CBS legendary sports announcer Jim Nantz interact with Canelo and then the impressive iron shot he hit,

WHAT A SHOT FROM @Canelo 👀

He's the Round 5 leader that's heading to the Final. pic.twitter.com/SbiYh7lOcO

Canelo very nearly made the ace for $500,000 charitable donation to me made with his shot ending up just 11 inches from the hole. As, you heard him also say, he typically plays or practices golf, almost daily, in addition to the boxing training regiment.

Now, we await his decision on next opponent and that’s likely going to be a bout with unbeaten WBC Middleweight champ Jermall Charlo coming in Las Vegas in May.

However, a BFW source has maintained repeatedly, recently that Alvarez wants the fight on PPV for maximum revenue and that he realizes that Charlo is the much bigger draw to help that than Makabu or Bivol.

For his part, Makabu just defended his Cruiserweight title in a close decision with Thabiso Mchunu in Ohio last Saturday night.

Alvarez made a one-fight deal with PBC in November for his Undisputed battle their fighter, unbeaten IBF 168 lb. champ Caleb Plant. Alvarez won the fourth world title at Super Middleweight by 11th round TKO. He also got a massive $40 million guarantee from PBC/Showtime to fight for them.

Then, shortly thereafter, came the request at the WBC’s annual convention by Canelo’s trainer/advisor Eddy Reynoso to move up some 20+ lbs. to fight Makabu for his title. That could represent a fifth world title win in a different weight class, including Alvarez’s one and only bout, a world title KO over Sergey Kovalev, for the WBO Light Heavyweight title in November 2019.

Back to the Golf. Canelo is paired Tour professional Wyndham Clark out of Colorado for the tournament and hopes their combined shots/score help him to make the “celebrity cut” and play on the weekend at Pebble Beach.