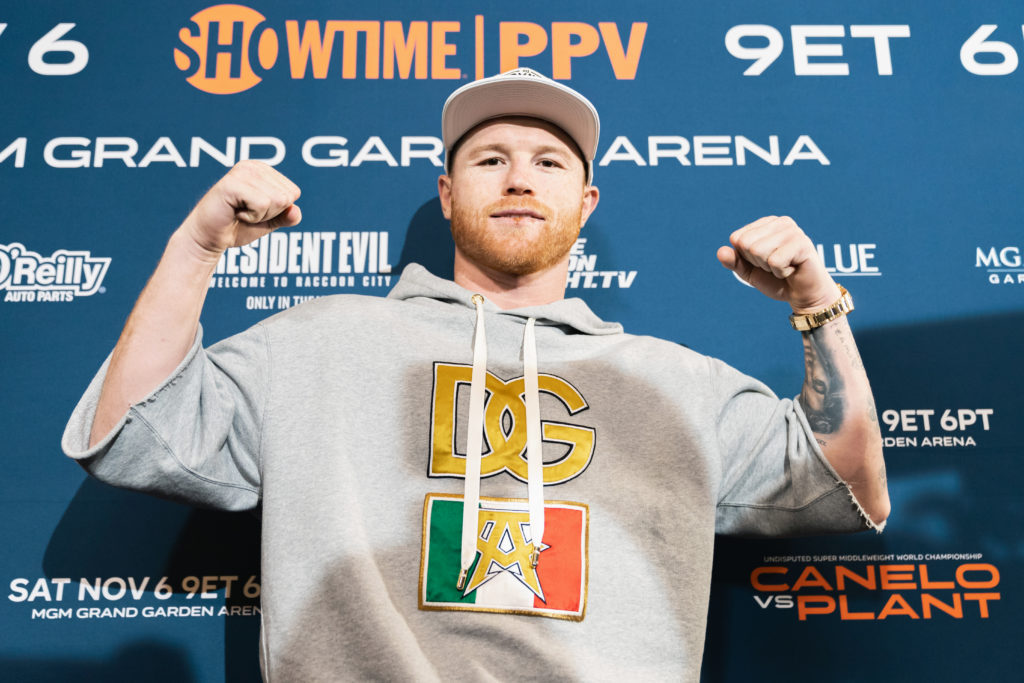 We have finally reached the final few days, as four division world champ Saul “Canelo” Alvarez attempts to become Undisputed Super Middleweight champ Saturday night in Las Vegas. And, clearly, what’s at stake for the man that already holds WBC/WBA and IBF 168 lb. titles is not something he’s taking lightly.

Alvarez and his Saturday night opponent, IBF unbeaten champ Caleb Plant, both arrived the MGM Grand on the Vegas strip for a quick media event to start their fight week off.

“It means a lot to me to win this fight for my legacy,” said Canelo. “That’s why we are here. He’s a good fighter with a lot of skills, but that’s nothing new for me. Saturday night, I’m going to make history.,,,

It’s nothing new for me. I just love to be here and come back to Las Vegas. To Fight here is always a pleasure for me. I love boxing. I love my fans. I love being in the ring.”

Alvarez and Plant are both attempting to become the first Undisputed champ at Super Middleweight in the “four belt era” (includes the World Boxing Organization titles). And, while Alvarez already has a Hall of Fame certain resume’, Saturday night has the potential to be one of the iconic moments of his career.

Meanwhile for the Nashville native Plant, 21-0, who now lives and trains in Vegas, he still continues to project and maintain that the biggest stage/fight of his life won’t affect him.

“I think he knows that he’s got someone in front of him who’s not just here to hand his belt over. Not just here to pick up a check…I’m here to get those belts….November 6th you’re going to find out first hand.

The media coverage and Q & A’s will continue as the week unfolds. And, for Alvarez, who’s fighting for the third time in 10 months, he knows that this is arguably the biggest fight he’s had since his two battles for the Unified Middleweight titles with Gennady Golovkin three years ago.

Maybe bigger, if he wins in devastating fashion over Plant, when he couldn’t drop Golovkin in either bout.

We are about ready to find out.

Paulie Malignaggi Back On BOXXER
Andy Ruiz Back Sparring, Ready For January
Advertisement
To Top