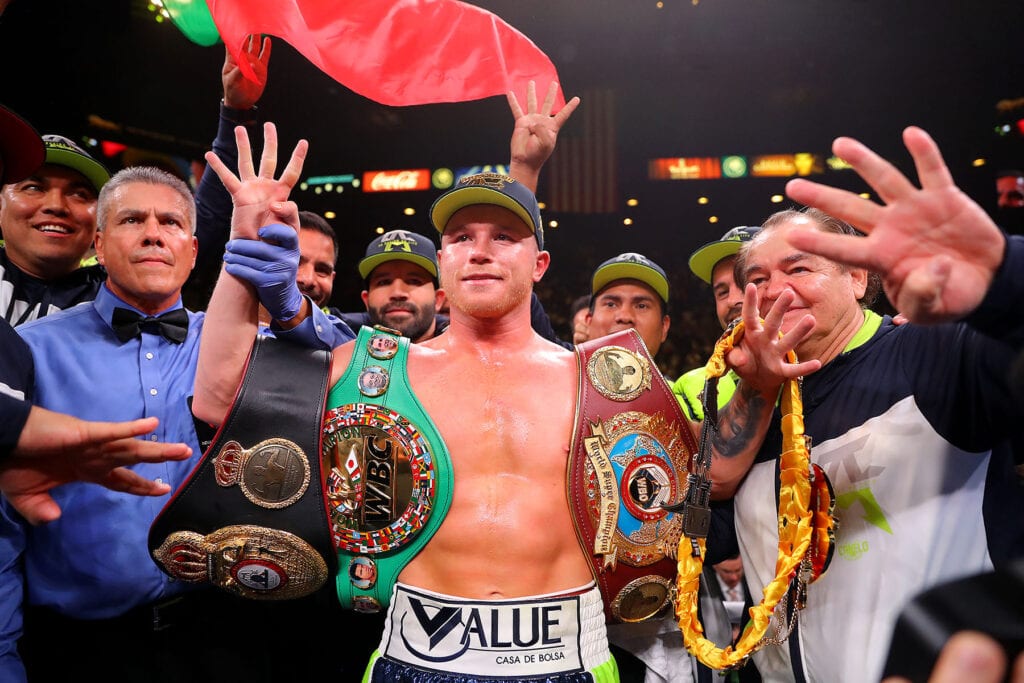 While we await confirmation of a Canelo Alvarez – Callum Smith Super Middleweight Championship battle for September, a report says Friday that the holdup is apparently DAZN streaming service wanting the four division World Champ to fight at a discount.

ESPN senior boxing writer Steve Kim wrote that Alvarez has agreed to fight Smith on September 12th for Mexican Independence Day Weekend but according to Canelo’s lawyer, DAZN wants him to take a significant pay cut due to the Covid-19 pandemic and the likelihood that very few, if any fans at all, could attend his next bout:

The latest on Canelo and his next fight. Still some issues to be worked out… #boxing

As we wrote earlier this week, Alvarez and Golden Boy Promotions zeroed in on the British WBA 168 lb. champ Smith and apparently made him an offer of $5 million for the September 12th date in Las Vegas. Reportedly, Smith and his promoter, Eddie Hearn of Matchroom Boxing, are seeking a $6 million-dollar payday.

But, that isn’t the main “money issue.”

Although, Kim’s item didn’t reference the specific amount of discount DAZN might be seeking from Canelo, it’s not hard to figure out with the massive 11 year $365 million deal he agreed to, they are not prepared to give him anywhere close to the over $33 million dollars for this fight.

Further, a year ago at this time Canelo and Golden Boy, along with their matchmaker Eric Gomez, failed to come to an agreement with Sergei Derevyanchenko, who was at that time the IBF number one Middleweight contender. After two warnings and deadlines, the IBF stripped Canelo of their belt and his Undisputed status at 160 lb.

Alvarez and his team were furious with Oscar De La Hoya and Golden Boy over that.

And, it took nearly two more months for him to agree and to secure another fight for DAZN. That ended up being his WBO Light Heavyweight Championship victory over Sergey Kovalev in November.

We also wrote previously that DAZN  has suffered severe subscription loss and financial hardship over the last five months. So much so, that the billionaire owner Len Blavatnik has been looking for an equity partner if not an outright buyer for it, since at least May.

Interestingly, DAZN will resume broadcasting fight cards in the United States tonight with Texas unbeaten welterweight Vergil Ortiz headlining without fans in California. DAZN’s next fight card is a joint production and promotion with Matchroom for August 15th in Tulsa, Oklahoma.

That was to have been a WBC Flyweight Championship defense for Julio Cesar Martinez, but he has severe respiratory illness (reportedly not Covid) and has been unable to train in recent weeks. So, with that fight off, Matchroom has elevated the woman’s Undisputed Welterweight championship fight between unbeaten Cecilia Braekhus and Kate McCaskill, as the new the main event

DAZN strategically wants the Canelo fight for early September to entice new subscribers for that month by the tens of thousands or more.

But, while the haggling of Alvarez’s pay and delays continue, that date being 8 weeks from now has to be a concern to get the fight finalized and promoted, etc.