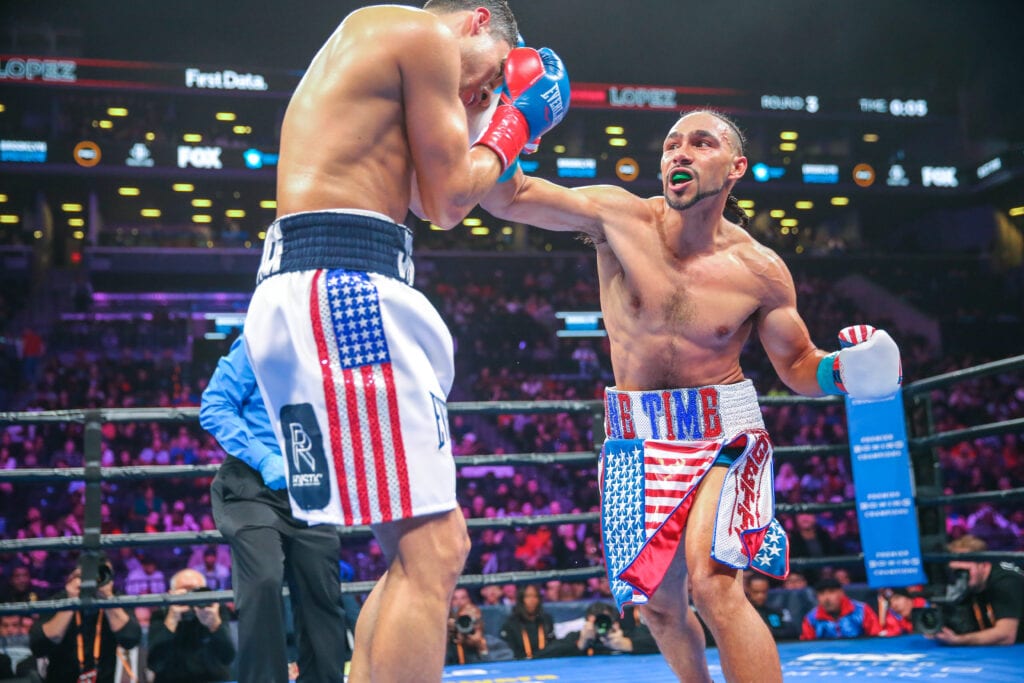 Can Keith Thurman again be fighter in Showtime Friday replays?

Former unbeaten WBA World Welterweight Champion Keith Thurman very much wants to get back on the big stage, when boxing resumes. And, Friday night on the Showtime premium cable network, will be a doubleheader reminder of the great up and coming figher he was and what Thurman hopes to recapture in future fights.

As we wrote previously, in the latest edition of their “Boxing Classics” replay series, Showtime will feature Thurman’s two biggest victories of his career. Those include: the 2016 fight of the year with “Showtime Shawn” Porter followed by his 2017 Unification Championship victory over Danny “Swift” Garcia.

In both fights, Thurman, known as “One Time,” displays great skill and footwork, along with landing many more clean punches and combinations that his opponents.

However, since the Garcia victory in March of 2017, the one constant and large obstacle for Thurman’s advancement into superstardom has been: injury.

First, he had damaged his right elbow in the Garcia fight requiring surgery and a lengthy layoff into 2018. Then, while rehabbing and training, Thurman suffered a deep bone bruise in his left hand that put him out of action for another 6+ months.

The WBC subsequently stripped him of the belt he won off Garcia in the injury layoff.

Once he was finally healed, Thurman, returned to the ring to defend his WBA version of the belt in January 2019 and showed some flashes of his old self (photo above), but also some ring rust in a 12-round majority decision over Josesito Lopez.

Still, that win vaulted Thurman, at that time 29-0, put him into the middle of his first ever Pay-per-View against eight-division World Champ and future Hall-of-Famer, Manny Pacquiao, last July.

Pacquiao put on a tremendous performance from the jump, including scoring an early first-round knockdown against Thurman. Later a big barrage of punches bloodied Thurman’s nose midway through the fight. Still, Thurman was able at times to score with his trademark right hand and some combinations, but, in the end, Pacquiao out-fought and outboxed him on his way to a 12 round split decision win.

And, in the aftermath of his first pro loss, Thurman had re-injured the left hand and had to have surgery. That’s sidelined him though the end of 2019, but had him projected to be fighting this Summer before all of sports was shut down by the Covid-19 virus in mid March.

Thurman, now 31 years old, has been on a media tour proclaiming that he will be healthy, when fights resume in June or later. And, obviously, he would love to have a rematch with Pacquiao, although that doesn’t seem likely.

We theorized that a second fight with Porter could be built up by Premier Boxing Champions, as a great potential step back in the world title picture at 147 lb. for the winner of that fight.

Porter most recently lost his WBC World Welterweight championship to Errol Spence by decision last September and is equally eager to get back in front of Spence, or maybe fight Pacquiao down the road.

For now, we are left to wonder.

Wonder whether Thurman can remain healthy? Wonder how big of a fight he can have in 2020 or will he have to wait longer?

And, when he does fight again, wonder if we will see flashes, or consistently the same healthy fighter, that will be shown in his two wins on Showtime Friday night.

Liam Smith looking for match with Kell Brook
Mayweather confirms he’s still retired
Advertisement
To Top
We use cookies to ensure that we give you the best experience on our website. If you continue to use this site we will assume that you are happy with it.Ok