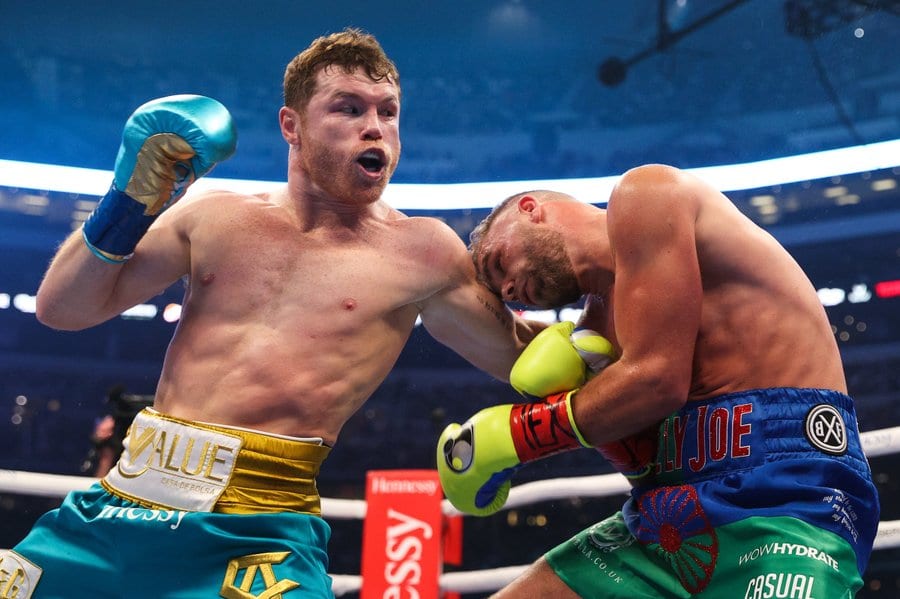 On Saturday night in Arlington, Texas, four division world champion Canelo Alvarez did what we thought he would and that’s defeat England’s Billy Joe Saunders.

However, the way things ended, not unlike back in February when Canelo’s opponent, Avni Yildirim quit on his stool after just three rounds in Miami, saw Saunders refusing to come out for the ninth round. And, it left this observer unfulfilled.

Unfulfilled, because Saunders had actually showed some flash, some hand speed and had won a couple of the middle rounds of the fight.

Unfulfilled, because Saunders had said repeatedly in the build-up to Saturday that this would “be the biggest moment of his life” to fight against the future Hall-of-Famer Alvarez in front of a record indoor crowd.

But, mostly unfulfilled, because despite getting his right orbital bone smashed late in round eight with a right uppercut, Saunders chose not to battle on to the ninth, when many others have in the past.

No, instead, he chose to take the easier way out, collect his money and leave the biggest stage quickly and almost meekly.

Look. I’m not suggesting that someone who most likely has a fractured eye orbital has an absolute obligation to go get seriously injured against a world-class fighter like what Canelo is.

However, I am saying that Saunders has been given the benefit of the doubt, repeatedly, throughout his recent professional career. This is, including a failed drug test that cost him a world middleweight title showdown with Demetrius Andrade two years ago. And, then getting himself suspended again. This time for idiotic comments about domestic violence on a social media video last Summer.

Yet, there he was Saturday, still given a massive guarantee of millions of dollars to be in front of an enormous crowd of 73,000 inside of AT&T Stadium. A place where they’re used to roaring for their Dallas Cowboys.

But, on this Saturday night of “Cinco de Mayo” week, they were doing so for a Mexican hero in Canelo.

Yet, for the clowning that Saunders had done earlier in the fight Saturday: sticking his tongue out at Alvarez, smiling at him and shaking his head no or yes after certain punches and then, shuffling his feet with his hands down low, trying to mimic Muhammad Ali, in the end he ended things in his corner, as soon as he got hurt.

And, that’s something that many others, even with lesser stakes haven’t done.

Yet, Bridges not only came out for the next round, but round after round after that, as well.  Bleeding and unable to see out of her left eye at all, she fought on still losing a decision in a non-title fight for not a lot of money, relatively.

We featured the late Diego Corrales’ amazing, EPIC comeback 10th round KO of Jose Luis Castillo 16 years ago this week. Looking back at Corrales’ left eye swelling shut, while being knocked down twice in that 10th round, it would have been very easy to just succumb. Just give up.

Alas, Corrales did not and turned it into an amazing redemptive KO win that we’re still talking about.

You can go back to the late Arturo Gatti fighting with both eyes virtually shut in repeated bouts and yet, not willing to concede defeat round after round in fights.

You can also play back arguably the greatest upset in the history of boxing- Buster Douglas stunning a one-eyed Mike Tyson 31 years.ago to take his Undisputed Heavyweight title. A fight, where Tyson continued to fight on and throw dangerous punches while basically unable to see out of his left eye in the final two or three rounds before being knocked out.

And, of course there’s a legendary story of “The Greatest,” Muhammad Ali suffering a fractured jaw early on at the hands of Ken Norton in their first. And yet, he fought on round after round intense pain with a jaw that had to be surgically repaired and wired shut afterwards.

Yes, Alvarez, now 56-1-2, was in control of a fight- on my card I had him winning six rounds to two after the 8th round.

And, clearly Saunders in my mind was going to have to summon something amazing and catch Alvarez with a lucky punch to set up any chance at victory. And, there was only a remote chance that could even happen.

Still, this was the previously 30-0 Brit’s first bout with a world-class fighter and really for the first time facing serious adversity in a hostile situation.

But, in the end, Saunders decided after one punch cracking his eye to sit on his stool and say “I can’t do it anymore.”

And while many, especially in England, will defend that, boxing is different.

As the examples have shown above, plenty of others have fought on with an eye swelling or swollen shut and still gone on to lose anyway. His fellow countryman, Heavyweight Daniel Dubois did it a few months ago for several rounds with his left eye fractured and unable to see. He eventually was stopped by Joe Joyce, but the effort was valiant and was there.

None of this should overshadow the continued success of arguably the greatest “pound-for-pound” fighter of the last decade in Canelo. He was winning the fight and would have likely stopped Saunders immediately at the beginning of the ninth round that never happened.

Yes, Canelo is that good and still in his prime. And, it’s very difficult to see who beats him at 168 lb.? Apparently American IBF World champ Caleb Plant, who hold the one Super Middleweight belt Canelo doesn’t have, will try next.

But, one thing is for sure: it was never going to be Billy Joe Saunders. Not on this night.

That’s because his mentality obviously was, as soon as trouble starts and/or I get hit with a serious punch. I can just decide, “I’m done.”

And Saturday Night, Saunders did.