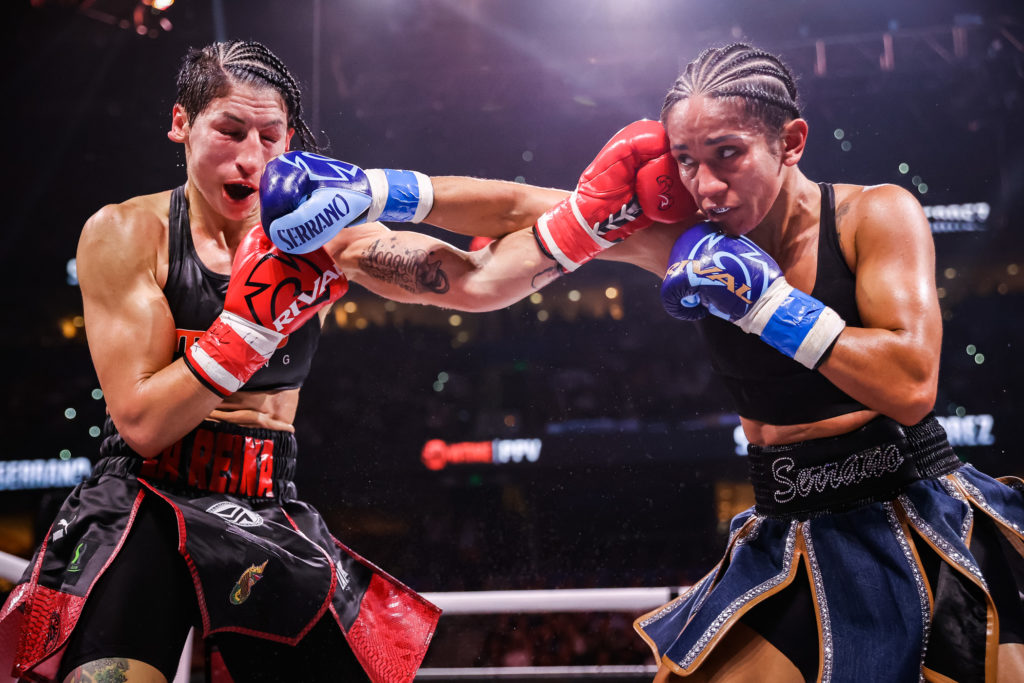 On the co-feature bout of the Jake Paul-Tyron Woodley PPV Saturday night in Tampa, FL, ladies Unified Featherweight Champ Amanda Serrano was dominant in her latest win. And, now it likely sets up a mega-fight with ladies Undisputed Lightweight champ Katie Taylor next year.

First, Serrano stormed out to a quick barrage of punches in the opening round against Miriam Gutierrez and had her trapped in the corner. It looked like a short night might happen for the Puerto Rican born Serrano, however, Gutierrez proved to be tough and took her repeated straight lefts and shots to the body for the full 10 rounds.

In the end, Serrano won a convincing unanimous decision for her 42nd career victory,

However, one look at the swollen, bloody mess of Gutierrez’s face showed who the easy winner was Saturday and that left everyone wanting more.

And the “more” is the unbeaten former Olympic champion from Ireland, Taylor. She just defended her titles last week in Liverpool, England against Firuza Sharipova last Saturday night running her record to 20-0.

So, will we finally see the Serrano battle with Taylor that was originally set for the Summer of 2020, but wiped out the Covid 19 pandemic?  The bout fizzled in a money dispute from Serrano with Matchroom Boxing promoter Eddie Hearn about the re-scheduled fight being at a reduced purse.

At the post fight press conference late Saturday in Tampa, Serrano made clear that she wants it, but wants to get paid for it.

“It’s the mega-fight for women’s boxing. Pound for pound top three any way you look at it…. I think we’re gonna throw off those ceilings for women’s boxing. Seven figure payday for both us. Madison Square Garden, the big theater, the main event. It’s gonna be an amazing night.”

While that is Serrano’s hope, we now wait to see if Tayor (with Hearn) will agree to come to the USA? Although, it’s a valid point that Taylor fought at MSG in the Summer of 2019. and has little argument to not fight there again, if there are millions there for both fighters.

Still, Serrano would also be wise to go to the U.K. for much larger price, too.