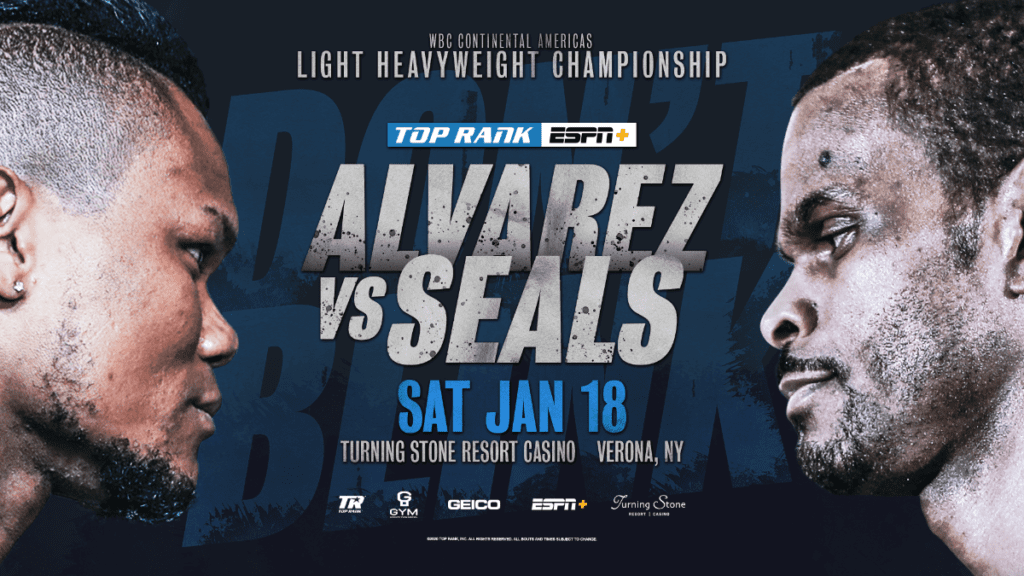 Alvarez-Seals square off in January

The 10-round showdown will be contested for the vacant WBC Continental Americas title, and the winner is expected to challenge for a world title in 2020.

Kicking off the year with a Light Heavyweight BANGER?

“This is a fantastic fight, a true 50-50 matchup featuring two of the division’s best punchers,” said Top Rank chairman Bob Arum. “The light heavyweight division is on fire right now, and the winner will be in a tremendous position.”

Alvarez (24-1, 12 KOs), the Colombian-born, Montreal-based boxer-puncher has not fought since Feb. 2, when he dropped a unanimous decision to Sergey Kovalev six months after knocking him out to win the WBO light heavyweight world title. Alvarez’s long layoff is due to a torn foot ligament he suffered in training earlier this year. He hopes a win over Seals will earn him another crack at world championship glory.
“I am very happy to get back in the ring after this long layoff,” Alvarez said. “I am looking at Jan. 18 to reboot my career against a strong puncher, Michael Seals, and begin my campaign to once again be on top of the boxing world. I have a lot of respect for my opponent, but in 2020, nothing will stop me from becoming a world champion again.”

“First, I would like to thank Top Rank and ESPN for giving Eleider this opportunity, as well as a plan to be very active in 2020,” said Yvon Michel, Alvarez’s co-promoter. “Eleider had a great run before his last fight, beating three former or current world champions in a row: Lucian Bute, Jean Pascal and Sergey Kovalev. The defeat in his rematch with Kovalev was very painful, but also a great learning lesson. Eleider Alvarez belongs with the elite of the light heavyweight division, and he will prove it starting Jan. 18 in Verona.”

Seals (24-2, 18 KOs), a Mobile, Alabama, native who played collegiate football at Alabama A&M, is still one of the division’s heaviest hitters at 37 years of age. An 11-year pro, Seals has been involved in many memorable brawls, including a 2015 Fight of the Year contender versus Edwin Rodriguez that included five knockdowns in three rounds. Despite falling short versus Rodriguez, Seals’ reputation as a fan-friendly fighter was solidified. He has won four in a row, including three by knockout in either the first or second round. He is coming off a one-punch, first-round knockout Oct. 18 in Philadelphia against Elio Trosch.

“Uncle Bob and Brad Goodman are giving me the opportunity of a lifetime, and I am going to put on a show for them,” Seals said. “Everyone knows that going the distance is against my religion. I’m going to bring the heat, and that’s no secret. Alvarez made a huge mistake in accepting me for his ‘comeback fight.’ When you sign a contract with me, I’m trying to force-feed you some ZzzQuil. This is a tune-up for him but everything for me. I’m not an opponent for the top fighters. I am a top fighter. I want a world title shot, and I won’t let this guy get in the way. He had his time. It’s my time.”

Did Adrien Broner punch Gervonta Davis in Saturday brawl?
Flores back in action against Heredia on UFC FIGHT PASS
Advertisement
To Top