Gatti-Ward III caps off a historic trilogy to date

There is honestly only one word to describe the trilogy of fights had between “Irish” Micky Ward and Arturo “Thunder” Gatti.

On this day, June 7, 2003, the Boardwalk Hall in Atlantic City, New Jersey witnessed what would later become unquestionably the 2003 Ring Magazine Fight of the Year as these two men traded blows, punishment and in their fight fashion, injuries throughout ten rounds.

At first, the fight didn’t start that way as Gatti began with the first three rounds using his footwork to outbox and escape Ward, whose ability to score body shots as he did in their previous two bouts was not there early.  All of this changed however in the fourth round when Gatti injured his right hand on Ward’s hip, and you could see visibly the agony he had when throwing that hand from the rest of the fight. At the end of the fourth round, Gatti’s trainer James “Buddy” McGirt asked him if he wanted to continue the battle in the corner after Gatti advised him of his injured hand.  Gatti said he wanted to continue and from there he got instruction to “keep that jab working” before the bell for round five began. 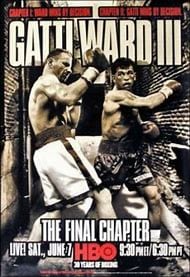 From here the toughness of Gatti began as well as the battle with Ward.

Ward cut on the left eye from Gatti with was caused by that injured right hand nonetheless at the end of the fifth round but Ward’s corner advised him “Don’t let a one-handed fighter beat you.” pointing out that Gatti was fighting one handed.

“What happened to the boxing?” was the words from legendary trainer Emanuel Steward proclaimed to end the fifth round on the broadcast.

The answer was without a doubt out the window.

Ward, however, did score a knockdown with a right hand that sent Gatti down. Gatti was able to beat the count and the bell sounding kept Ward from being able to take advantage.

Once the seventh started, they began exchanging shots in the center of the ring in what became an all-out brawl. The crowd who was loud chanting “Gatti” the entire night became audible to the point they almost drowned out the HBO broadcast team of Jim Lampley, Larry Merchant, and Emanuel Steward. They would continue this to the last second of the tenth and final round, where they both embraced after the closing bell. They both would also embrace hospital beds afterward as well.

After the final bell, the final scorecards read, 96–93, 96–93 and 97–92, in favor of Gatti by unanimous decision in what would be the last fight of Ward’s career. The ninth round by Steward had called the “Round of the Century.”

While this was Ward’s final battle, Gatti would fight on and even win the WBC Vacant light welterweight title in 2004. He would continue until losing against Alfonso Gomez in 2007 ironically with former rival Micky Ward in his corner as a trainer.

Gatti was mysteriously killed in 2009 in Brazil sadly but was post-posthumously elected into the International Boxing Hall of Fame in December 2012.

When asked what made there fights so special, Ward stated in a 2011 interview to The Globe and Mail:

“I think our styles were just made for each other,” Ward said. “I mean he could box, which he showed in the second and third fights.

There is no way after watching this fight in particular; anyone could disagree.