Alvarez came into the bout undefeated (41-0-1, 30 KOs) and was the reigning WBC titleholder at 154 and was coming off his latest defense against Josseito Lopez in September 2012, stopping him in five rounds. Trout (24-0,14 KOs) was coming in as the WBA titleholder at 154 and was off his latest defense beating Miguel Cotto by unanimous decision that last December. 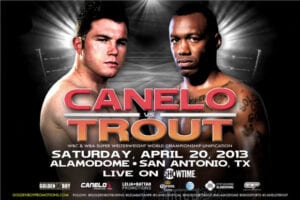 Once the bell rang, it was a tale of a fight that clearly showed the effects of the open scoring policy in boxing had in place. The WBC rule that was in play for the bout had open scoring on the fourth and eight rounds. That meant both fighters would know where they stood by the three judges at ringside during the fight.

The almost 40,000 that filled the Alamodome that night to root on Alvarez during Mexican Independence Day Weekend witnessed what a performance by Alvarez that as the match went on, grew more extensive by the cards, but not by the causal watching at home was.

The big turning point in this fight came in the opening moments of the seventh round, as Alvarez scored a knockdown by landing a straight right hand early on that staggered him before he fell. This came fresh off the heels of the sixth round, which may have been Trout’s best round of the fight. In that round, late Trout was keeping the pressure on Alvarez up against the ropes.

Trout beat the count and continued, but from that moment, the fight became one where it was hit and not get hit for Canelo. The final punch totals proved that, as well, as Alvarez landing 124 out of 431 (29%) compared to Trout, who landed 154 out of 769 (20%).

This championship bout went the distance, and at the final bell, it was unanimous decision victory for Alvarez by the judges’ scorecards of 116-111, 115-112, and 118-109, respectively. While the last card is pretty wide, the bout was a clear win Alvarez to remain undefeated.

The key to this bout, of course, is after this contest set up the infamous bout for Alvarez taking on Floyd Mayweather to close out the year and losing by unanimous decision and is his only defeat to date. On this, however, Alvarez was the Ring Magazine and unified champion at 154.